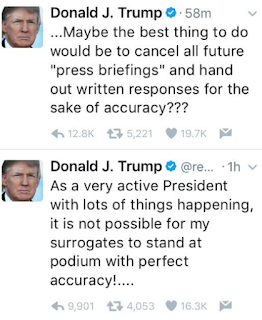 1. The way you typed this with your chocolate-cake-covered thumbs, you have your surrogates somehow collectively being a very active president. So yes, you totally have an accuracy problem. Just not where you in your delusional narcissism think it is.

2. It's your surrogates' job to provide accurate information about your administration to the press. Not to hide in bushes. Not to yell at black people. If they don't provide accurate information, they can always use the time-honored "let me get back to you" duck and run, which at least gives everyone the impression that they're taking the time to ask questions and do research to be accurately informed while they're most likely stalling for time to find a way to spin your increasingly delusional and bizarre words and actions into a way to blame big black Barack Obama for your catastrophic failings.

3. Speaking of your catastrophic failings, if your surrogates don't have perfect accuracy, either they're incompetent or you are. Which, again, is Barack Obama's fault. Or Hillary's. Or now Comey's! Your hallucinatory little world is filled with wondrous possibilities.

4. "Lots of things happening" is a conveniently passive way of implying your schedule is just packed with important presidenty things, which in the real world do not involve golfing every weekend at tremendous taxpayer expense, locking up your third failing marriage in a gilded New York tower also at tremendous taxpayer expense, being an appallingly absent parent to all your children except the ones who actively sustain your practices of corruption and self-aggrandizement, and desperately changing your lies about why you fired the Republican-appointed, served-under-four-consecutive-presidents, in-the-middle-of-investigating-you-for-corruption FBI director on the national news and THEN by letter while you knew he was out of town instead of being a big brave professional "businessman" president and doing it in person.

5. "Cancel all press briefings"? Isn't that what a despotic dictator would do? I'll give you a moment to ask your presidential surrogates if anyone knows the word despot.

6. Getting back to point #1, your inability to write an accurate tweet makes your proposal to "hand out written responses" is the exact opposite of "the best thing to do."

7. And while we're on the topic of your tweets, they're getting longer and more punctuationy and more desperately-blame-everyone-else-but-yourselfy by the day. You're not fooling anyone but your arrogance; you are unhinged, flying off the rails, and hopefully literally and very soon slamming your smug face into the side of a mountain in a catastrophic crash of your own psychopathy.

9. I loathe everyone who voted for and still defiantly supports you.