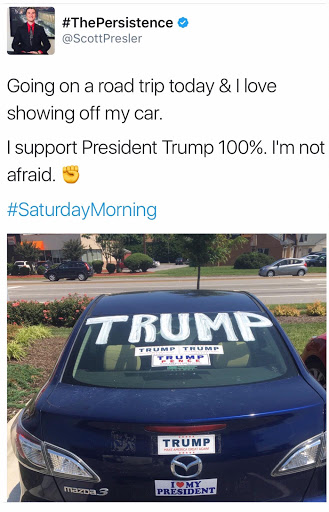 Oh, Scott. Scott, Scott, Scott. Bless your heart. I'll try to keep this short so you can get back to showing off your import:

1. The fact that you feel obligated to state that you're not afraid is tacit acknowledgement that we're well past the tipping point where most of your swamp friends are afraid to admit they support Melania's Profound Regret and all thinking people are afraid for reasons that are apparently beyond your understanding.
2. Speaking of understanding, "tacit" means "understood or implied without being stated."
3. Really. One little sticker is more than enough to proclaim to the world your catastrophic lack of judgment. But five little stickers AND an entire bottle of rub-on shoe polish? That just exponentiates your bad judgment about your bad judgment.
4. "Exponentiates" means "raises one quantity to the power of another."
5. Don't worry. Betsy DeVos took that last one off the test. Math is apparently too Satany.
6. Your car photo doesn't show your license plate so I can't discern what state you live in -- gratuitous "of denial" and "of delusion" jokes notwithstanding -- but a perfunctory google search just showed me that obstructing your rear window outside of a varying allowance of a few square inches in each corner is considered dangerous and illegal in all of the state traffic codes I read.
7. STATES' RIGHTS! YEAH!
8. "Perfunctory" means "carried out with a minimum of effort."
9. I apologize. I know I promised to keep this short. But there are so many things profoundly wrong with you.
10. Mazda is a Japanese multinational automaker based in Fuchū, Aki District, Hiroshima Prefecture, Japan. Four of the five little stickers on your Japan-is-not-America Mazda clearly -- CLEARLY! -- state "MAKE AMERICA GREAT AGAIN!" In all caps! With exclamation points! One has to wonder the level of cognitive dissonance required to put multiple pro-America stickers on an imported car and declare a "love" of "showing off" that car in presumably pro-American "support" of a by clear implication pro-American "president."
11. "Cognitive dissonance" means ... oh, never mind. Betsy won't allow it on the test either. Enjoy your metaphorical obstructed-view drive.
12. "Metaphor" means ... oy ... let's just say it's one fewer than metaphive so you won't have to count so high.
Posted by Jake at 6:49 PM