My family buys nothing—NOTHING!—more important than a package of socks without first going through the Ten Steps of Painfully Indecisive Covetousness:

1. Oh, look! There’s the thing I’m actively looking to buy and it’s right here in front of me right now so my search is over and I’m going to buy it.
1a. or: Oh, look! There’s something I just stumbled on in a store that two seconds ago I didn’t know existed and now I desperately want it so I’m going to buy it.
2. But am I sure about this?
3. Maybe I can find a cheaper and/or better version of it somewhere else.
4. But first let me take 72 pictures of it on my phone so I can remind myself in perpetuity that I don’t have it every time I scroll through my photos.
5. It’s totally worth it to drive to five similar stores scattered across town and then to spend 30 minutes researching it online if I can save five dollars when I inevitably buy it.
6. It goes without saying that it’s also totally worth it to go back to visit it nine or fifteen times at the store where I first saw it, just to be sure I really want it or to see if it goes on sale.
7. But I’m not obsessing about buying it or needlessly delaying this inevitable purchase or anything.
8. OK, two weeks have gone by and my life is empty and chokingly meaningless without it so I’m just going to go buy it.
9. Well, shit. It’s gone.
9a. or: Now that I have it home, I’ve decided I really don’t like it so I’m going to return it.
10. I’m just going to run in to Target for a few quick things.

SO! Imagine my surprise when—mere hours after we realized that we’d probably need to buy an easy-to-use recliner with a tall back for my dad because he’ll have problems sleeping in a flat bed when he comes home from the hospital so we were going to split up and start multiple Step Ones at all the recliner stores in town this afternoon—Mom sent me an urgent text telling me to come to the first recliner store she’d visited because she’d found the perfect recliner and she’d put a hold on it and wanted me to come test it before she bought it.

Which I did. And then which SHE did.

Let me type this slowly for you so you can comprehend its tectonic shiftiness: My mother, the High Priestess of the Ten Steps of Painfully Indecisive Covetousness, BOUGHT AN EASY-TO-USE-RECLINER WITH A TALL BACK ON JUST THE FIRST STEP. Without even blinking.

I’ll give you a moment to lift your jaws up from the shifting tectonic plates beneath you.

What’s more, our awesome, truck-having neighbor Dan just happened to be free and willing to transport the recliner home for us ... and within 90 minutes start-to-finish we became the proud owners of a new easy-to-use recliner with a tall back. WITH NINE UNUSED STEPS JUST HANGING OUT IN SPACE IN A FOG OF ABANDONMENT AND CONFUSION. But maybe I can sell them individually on Etsy.

Anyway! I had to do some major furniture shuffling to fit our new easy-to-use recliner with a tall back into our living room, but I think it’s now in a primo spot where Dad can be comfortable and not feeling like he’s jutting out into the room as he entertains visitors. And he has a bunch of medical stuff—in addition to his boombox for his books on tape—that he’ll need to keep near him, so I repurposed some decorative chests to become decorative side tables for him. Plus I cleaned them all with Liquid Gold, which those of us who like our wooden antiques to be alarmingly shiny know takes 17 days to dry. So that’s why I’m posting this artfully composed, judiciously-cropped-so-you-can’t-see-what-a-mess-the-rest-of-the-room-is photo at 7:42 instead of 4:00. 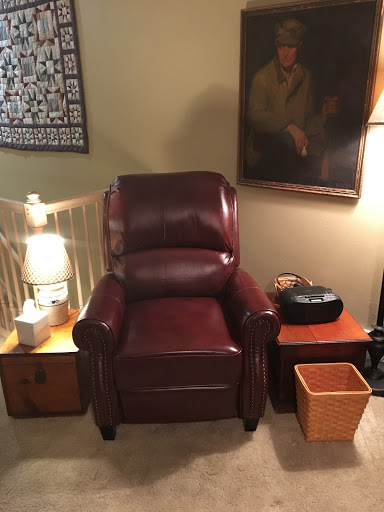 (It’d look mega-more handsome without that butt-ugly quilt and that why-the-hell-do-we-have-a-genuine-oil-painting-of-a-stranger-holding-a-gun-in-our-living-room painting. But rectifying those situations opens a whole new Ten Stages Of Painfully Indecisive Purging process. So let’s all just admire my alarmingly shiny wooden side tables for now.)
Posted by Jake at 7:57 PM