Are you sitting down?

Because I was WHEN BITCHY KITTY OF HER OWN VOLITION AND YET-TO-BE-ARTICULATED-BECAUSE-SHE-ONLY-KNOWS-HOW-TO-MEOW-AND-WE-HUMANS-DON'T-SPEAK-MEOW-YET AGENDA JUMPED INTO MY CHAIR AND SAT NEXT TO ME PRESSED UP AGAINST MY INCREDULOUS LEG ON WEDNESDAY NIGHT: 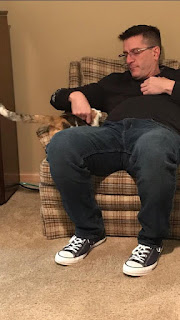 It took me 60 hours to post this photo because I'm still processing this lurching plot twist in the soap-opera-frenemies Bitch Kitty Life storyline. Also because Mom didn't send it to me until late yesterday. But still.

Granted, once Bitch Kitty jumped into my chair she sat in an extremely weird position with her face buried in the back cushion and her self-righteous butthole gazing out into the room ... and she growled like an over-torqued automatic-pencil-sharpener motor as I tried to pet her ... and her over-torqued-automatic-pencil-sharpener-motor growling only intensified if my attempts at petting left her ears-and-head area and ventured down toward her tail-and-butt area but then again we did teach her to be a lady who doesn't put out on the first date so I guess we should be proud of her for that ... and I had just emptied her litter box so I was probably dusted in minuscule-but-still-possibly-scented particles of litter-box floaties so perhaps she was just following her nose and her baser instincts when she jumped into the chair with the intention to poop on me and quickly realized her error but was staying there only under a pathetically inept veneer of politeness ... but the fact remains that I now feel obligated to beg for her love every moment of every day until she deigns to jump butthole-out into my chair again one day next year ... and then one day the next year ... and then one day the next year ... until she up and dies on me and breaks my heart because I thought we had a thing going but her yet-to-be-articulated-because-she-only-knows-how-to-meow-and-we-humans-don't-speak-meow-yet agenda all along was to make me think I had a chance with her and she gave me the ultimate dis from beyond her over-torqued-automatic-pencil-sharpener-motor-growling grave. Sigh.

Also: I look like a short, wide squished marshmallow in this photo but I swear it's just the evils of foreshortening and shadows and I'm actually totally swole and ripped for my big stripper reveal in The Full Monty and you should come see it but you should also squint just in case I actually do become a short, wide squished marshmallow before then please pass the doughnuts oops did I say doughnuts I meant celery but I'll totally eat that box of doughnuts if you don't want them because it's a shame to waste perfectly good food.

Also: Mom and Dad hate those plaid chairs (we have two of them because civilized people have sets of matching chairs and we as a family no longer live in a cave) but while I'm not in love-love with the plaid I still love the chairs' clean Mid-century lines and confident geometries so tell Mom and Dad that we should keep their clean Mid-century lines and confident geometries incorporated in our gracious home décor and just re-cover them in something that doesn't look like it came from the textile tumble table at an Eddie Bauer Home Store going-out-of-business liquidation event.

Also: I just purged a ton of shoes I haven't been wearing and I rediscovered these blue Chucks and aren't they awesome?