So I survived my first week back on the four-eyes stolen-lunch-money bus, and while getting my eyes used to seeing the world through what seemed like dirty water for a few days took some getting used to, I didn’t go home from work once with a headache last week. Which is five fewer headaches than I’ve brought home in weeks past.

And since my new goggles are only for reading and computer stuff—which happens primarily at work, where I don’t think I have ever had blog-worthy party pictures taken—I tried to take a self-portrait to show you-all what I look like in rimless glasses. 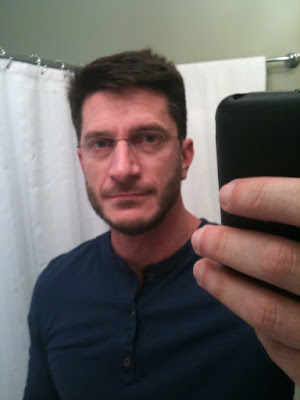 See that shower curtain in the background? I hung it in early December when we finished the bathroom renovation. I’ve washed and dried it three times since then. So why does it still stubbornly hold onto the fold marks from its days in its store packaging?

Speaking of cheap shit, remember the little face-clinging disposable sunglasses I got when my eyes were dilated? (You should, because the pic of me sporting them has been the only thing on my blog for the last 15 days.)

They were too cute to throw away and too weird to actually wear in public. Fortunately, we have a prisoner in our home we’re not above embarrassing with cheap costume pieces. The poor guy has been forced to wear Santa hats all through Christmas season every year … and now he’s stuck wearing cheesy cheap (like Velveeta!) sunglasses until we get bored and release him from his misery. Or until the cheap glasses pop off and roll across the floor under the couch: 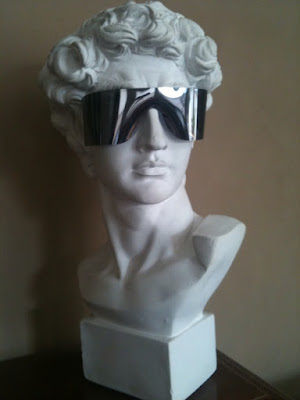 Odds and ends. But mostly odds.

It’s really hard being absolutist about stuff. Well, it’s hard most of the time. For example, I think Sarah Palin and Glenn Beck serve one purpose: giving low-information citizens the emotional permission they’re looking for to stay uneducated, hostile and solipsistic. I loathe Sarah and Glenn and I can barely be civil to their followers who keep giving them a platform to spread their pseudo-intellectual cancer. And I see no gray areas in this matter. Unfortunately, as an absolutist, I see no gray areas in lots of places. For instance! My abandonment of Coke Zero. I enjoyed my last Coke Zero on January 2 (I prefer to start my self-deprivations on Mondays) and while I want to drink another Coke Zero more than I want to choke Sarah Palin with the empty cup, cheating on my resolution is tantamount to quitting it altogether. So I can’t allow myself even a tiny little sip in my withdrawal process.

I am full of gray areas regarding this blog. I clearly don’t write in it much anymore, even though deep down I really want to. But I’ve just grown lazy and complacent about it. And as an absolutist I should just abandon it altogether. But then I’ll be minding my own business at a street fair or a diner or—as was the case this weekend—a lesbian birthday and suddenly a stranger will pop up and start saying nice things to me about my writing and my weird sense of humor and how he or she really, really, really looks forward to my posts and then I think SHIT. Now I have to go write in it again. And I’ll write a few more posts and then I’ll get lazy and then I’ll think I should just shut it down and then another pesky fan will pop up and peskily say nice things about my blog and the cycle peskily starts over. Darn you, pesky fans! Darn you like a sock!

My socks are in a permanent state of wetness. Because it’s snowier here than a girl who lives with seven tiny men in the woods. And I seem to have a highly advanced sense of puddle-dar. Because I keep stepping in calf-deep piles of snow and slush and wetness and then spending the day in wet socks. And the snow here is so deep and so copious that there’s no chance it will be gone any time soon. So I’m now carrying extra socks in my gym bag everywhere I go. And while we’re on the topic of the blizzard, I quickly grew tired last week of predictable little neologisms like snowpocalypse and snowmageddon and snOMG. So I wielded my considerable blogging and Facebooking influence to get everyone to start calling the blizzard Snownadu—which is both an homage to my favorite song ever plus a nod to the fabulous disco-ball effect you get when you cover a city in almost two feet of snow. But Snownadu never took off. Which is a total snowdgedy.

The snow is extra sun-glinty when your eyes are dilated. I went to the eye doctor on Saturday for the first time in probably five years. And I stumbled out an hour later with enormous pupils and an $855 bill for a checkup and ultra-expensive new glasses (because they looked better than the cheap ones and if I’m gonna start wearing glasses post-LASIK I want to look totally badass, or at least slightly handsome). But! Enormous pupils are not the ideal accessory for a sunny day in a city blanketed by a Snownadu (see how easy that is?). So I was forced to wear temporary roll-up sunglasses (because I forgot to pack real sunglasses even though I knew I’d be dilated) in my cab ride (because I didn’t think I should drive—especially in two feet of snow—with dilated pupils) home. Unfortunately, I wasn’t too proud to take a self-portrait. Or too smart to post it on my blog: 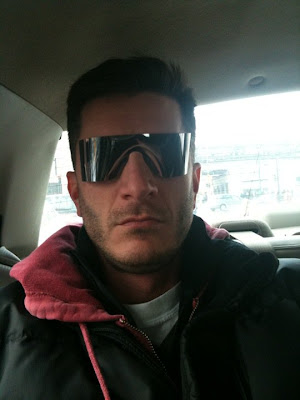