Fourty-Three
I crossed back into the prime numbers last week. And since 43 is kind of a wishy-washy number that has neither the young sexiness of 42 nor the august milestoniness of 45, I went home to Iowa to age quietly with my family. We celebrated by doing fun uncle things, hanging out accomplishing nothing, and eating our weight in cake and ice cream and homemade pie and pizza. For a non-remarkable-age birthday, it was remarkably fabulous.

Cancerous Moles
My birthday always means it’s time to go on my annual mole patrol at my friendly neighborhood dermatologist. Because I’m a moley person. And it just seems prudent to make sure my moles aren’t trying to kill me. Because then where would they go to grow and raise families and contribute to society? You can’t thrive on a dead body. Unless you’re a maggot. Or Maggie Gallagher. Anyway! I had a couple suspicious moles removed and biopsied in 2005, but I’ve managed to escape the dreaded mole knife since then. Until now. Because in two weeks I get to have two more moles hacked out of my dermis. But at least this time they’re not in the middle of my back (which makes replacing bandages all but impossible ); they’re almost twin moles on the lower, way-more-reachable parts of each thigh. A quick read of my blog post from 2005 reminds me that I wasn’t allowed to work out for two weeks after the last biopsies as the stitches healed. A quick check of my vanity calls bullshit on that for 2011.

Vacation Days
I have officially used up my entire allotment for the year. Well, technically not yet; since I’m not training for a marathon this summer and therefore not beholden to a draconian weekend running schedule, I’ve booked fabulous getaways from now until Labor Day, all through the weekends when I’d normally be getting up at 4:00 to pound out anywhere from 6 to 22 miles. So watch out, Rehoboth, D.C., Saugutuck, New York, Provincetown and Cedar Rapids! I’m coming to visit you this summer!

Twenty-Five
One of my vacation trips will be to my hometown for my 25th high school reunion. There’s even a Facebook page where people post nostalgia-related comments about favorite bands and local hangouts and fashion faux pas from the mid-1980s. I’m still weirdly fascinated by the fact that this group of people I knew before the Internet existed now all have email addresses and Facebook accounts. Not to mention grown children and third marriages.

Forgetfulness
I had about four more vocabulary-word-related topics I wanted to cover here as I was formulating this blog post in my head, but once I sat down to actually write it, I can’t remember what they were.

Pill Organizer
I’m now on so many old-man medications and supplements I had to break down and buy an old-man pill organizer. Here’s a picture of it open to the pills I took on my birthday last week: 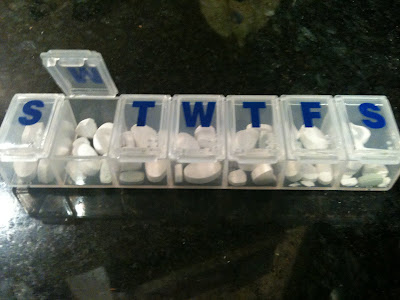 Fun game for pharmacology aficionados: Guess what’s wrong with me based on the pills you see! Decoy alert: One of pills I take every morning is plain old vitamin D.
Posted by Jake at 2:24 PM 17 comments:

$100: What is this hematoma on my arm?
Thanks to some inexpert poking by a clumsy phlebotomist (which should totally be the prequel to The Drowsy Chaperone), I have a big ugly bruise in the crook of my arm. And the damn thing keeps growing and darkening, albeit at the speed of a Palin in a spelling bee. So I’m not worried that I’m slowly dying of an internal hemorrhage.

$200: What is my belt?
Never buy a $9.99 belt from H&M. Unless you’re a contestant on The Biggest Loser and you want belt-related proof of dramatic weight loss. Because my ultra-cool belt that fit perfectly three months ago now reaches past my left hip bone as it wraps around my waist. And it makes me look like I’m playing dress-up from my daddy’s closet. My daddy’s ultra-cool-belt-containing closet, but my daddy’s closet nonetheless.

$300: What is my faith in humanity?
There is a lot to make people think humanity has hit an all-time low. To wit: Newt Gingrich. But then every morning I encounter a little glimmer of hope that could make him go away. If we were lucky. There’s an elderly gentleman in a wheelchair who parks on the same corner in the Loop every morning, right under the El tracks. Nearly everyone who walks by says hi or brings him something or drops a coin in his cup, all of which could completely counteract the Gingrich Effect. Except it doesn’t. But there’s another group of people who wave at this gentleman too. And their collective gesture alone elevates my opinion of all of humanity (except, of course, Newt). They’re the El conductors who actually slow down their trains, lean out their windows from two stories up, toot their horns and wave at the old guy. I’ve never seen it not happen as a train goes by. And I’ve always seen the gentleman sit up straighter in his wheelchair when it does, as if he’s saying Do you see that? I have the power to make the trains slow down. I’m somebody!

$400: What are my quads?
After the marathon in November, my trainer ratcheted up the brutality of our workouts about a thousandfold. And since I’m not doing any cardio, the damn workouts are working! I crossed the finish line somewhere around 190 lbs, which is an artificially low post-run weight from my normal 195ish lbs. But now, five months and no miles later, I’m tipping the scales at 218 lbs, which is 13 lbs heavier than I’ve ever been! Woot! A lot of the growth seems to be in my upper thighs and my brand-new, never-before-existed butt, which (un)fortunately means most of my jeans don’t fit anymore. And it’s not like they don’t fit just a little; they totally won’t go over my upper-leg area. It’s becoming an expensive problem to have, but it’s the welcome price of gay male vanity. Plus it totally proves my cheap $9.99 H&M belt is stretching farther than the truth as spoken by Michele Bachmann.

$500: What are my feet?
Back when I was just running 5K races, I bought running shoes in cool colors … and in my always-been-this-way-since-college 10.5 street-shoe size. Which always felt pinchy, but what did I know about how running shoes should fit? Before my first marathon, though, I got fitted for running shoes by the friendly experts at Fleet Feet (true motto: Never buy running shoes based on color) and got bumped up to a 11.5 wide shoe, since your feet tend to spread out as you pound out the miles and they need someplace to go. Now, a full eight years after that first fitting, I can barely squeeze my dogs into my regular size-10.5 street shoes. In fact, the 11.5s don’t fit so well either. My feet have actually grown to a size 12 in the last few years. Which means one thing (or maybe two, but this is a family blog): I get to buy all new shoes!
Posted by Jake at 5:37 AM 1 comment:

It's our time. Permanently ink it in.

I ran my seventh (and most likely last, but never say never) marathon in November, which by my rules gave me permission to get a seventh tattoo. I'd narrowed down what I wanted to about ten different tattoo designs on five different body parts. But a great lack of focus can lead to great abundance of regret in the tattoo department. So I waited until one idea emerged in my mind as the coolest and most mandatory of all possible ideas. Because tattoos are like ice cream flavors; eventually you just know what you want. Or something like that.
Anyway!
Many of the ideas involved quotes from the vast Stephen Sondheim canon. I toyed with "Toward the verticals of trees" climbing up the side of my torso and "It's our time. Breathe it in." wrapping around my forearm. I'd even played with fonts and made a few templates of those ideas to tape to my body and see what I thought of them.
But I love tattoos that peek out from shirts or waistbands. And I've always thought tats on the insides of a biceps (fun fact! biceps is both singular and plural!) are hot. And it occurred to me late this week that there's a better, shorter, more impactful quote from "Our Time." And it would look awesome in a swirly, brambly, vaguely triangular shape on the inside of my biceps, where it would also have the bonus feature of peeking out from a short sleeve.
And 48 hours after the idea occurred to me, it was etched in ink on my person. And I love it: 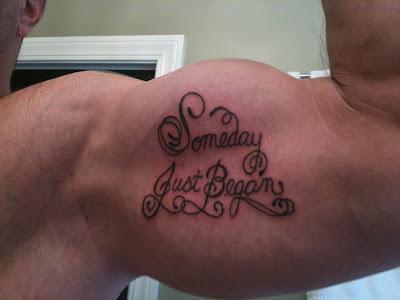 Of course, just like with ice cream flavors, you can't stop at just one. I still needed to get my seventh dot on my bonus eighth tattoo (the master tattoo that acts as a table of contents for all my other tattoos, cataloguing them via an ingenious system of dots). Weirdly, there was already a mole kind of where the last dot was supposed to go. So this dot looks a little big. It also looks like it sits a little high, but since I can't really have it lowered I choose to think that it represents all the damn hills I had to climb in the New York City Marathon last fall. In any case, with this tattoo, my collection is complete: 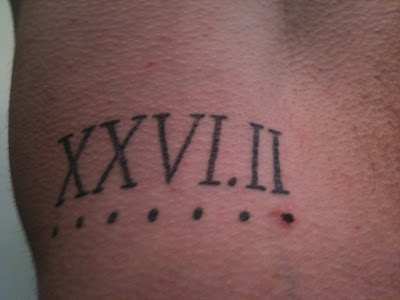 And by "my collection is complete" I of course mean "I've just whetted my appetite for more tattoos." But don't tell my mom.
Posted by Jake at 8:52 AM 7 comments: