Grant Wood, best known for his iconic "American Gothic," lived and worked most of his life in and around my home town: Cedar Rapids, Iowa. His legacy in the area—in addition to an exhaustive collection of his work in the Cedar Rapids Museum of Art permanent collection—includes an annual art festival, a grade school (my alma mater!) and even the entire region’s public education agency—all in his name.

Grant Wood was a pioneer in a loosely coordinated artistic movement called Regionalism, which eschewed modernist, abstract trends like Impressionism and Cubism in favor of stylistic, romanticized views of everyday rural life in the 1930s. The Regionalists were less concerned with the trendy politics of 1930s Social Realists than with renouncing the hegemony of popular European art and culture and celebrating the honest work ethic and modest demeanor of the Midwest.

In 1928, Wood received a commission to create a giant stained-glass window for the American Legion in Cedar Rapids. In preparation, he traveled to Munich to study ancient stained-glass techniques under Germany’s famed master craftsmen. The window he created, featuring a 16-foot Lady of Peace standing over six life-size soldiers representing the Revolutionary War through World War I, was a masterpiece of technique, form and color. Though as far as Google and every search term I can think of are concerned, it never had a name. But you can see it in all its nameless glory right here: 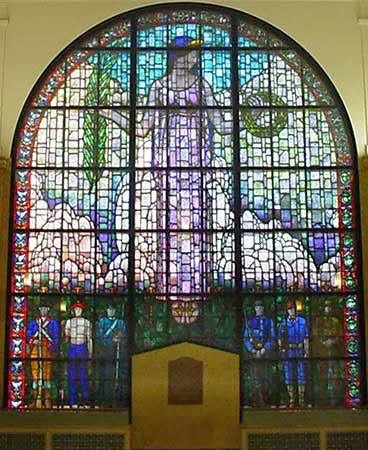 Wood’s point, lost completely on the knee-jerk reactionaries the painting so elegantly mocked, lies in the fact that "Washington Crossing the Delaware"—that beloved icon of American patriotism—was painted by a German.

I loved this painting before I even knew its story. The delightfully smug women drew me in because their spiritual progeny hung just a few branches over on my family tree. The Blue Willow teacup fascinated me because its cousins served as my grandmother’s everyday dishes. (Have you ever eaten green Jell-O from a blue plate? It looks off-puttingly brown.) And that shape—that relentless horizontalness—made the painting such a challenge to display in any setting.

My framed print of "Daughters of Revolution" along with one of my grandmother's teacups that I've always displayed with it are currently not challenging me to do anything but pay for their storage in a giant and impeccably tidy storage facility at the edge of town. But they are quite literally among my favorite possessions and they will see the light of day again soon. In the mean time, I am proudly and dutifully as a Cedar Rapidian sharing the works here so you can enjoy their oft-overlooked brilliance and awesomeness.
Posted by Jake at 6:25 PM