Nothing good can come of this 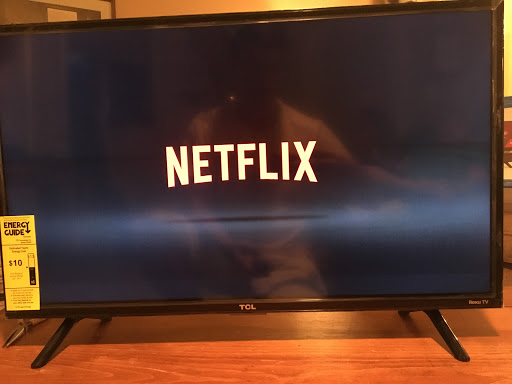 We are the last family in this and three adjoining galaxies to finally drag ourselves kicking and screaming into the 21st century. The Netflix Empire is now complete.

Mom is having shoulder surgery in the morning and will have her arm immobilized and be sleeping in a recliner -- and no doubt confusing the hell out of the cat -- for the next 6-8 weeks. Our awesome cousins are lending us a recliner, which is now holding court pretty much in the middle of our living room. And I broke down and bought us a living-room smart TV -- the dark magical powers of which I am just beginning to understand -- which I just spent the last 17 decades tonight setting up, connecting to our WiFi, and repeatedly cursing to an eternity in hell as I've navigated the clearly intentionally confusing channel selection options in the 1,700-screen setup process that involves a remote so tiny that its buttons wrap around the sides so you inadvertently shut the sound and probably the blender and the nearest three pacemakers off and on as you press the top buttons to do all the primarily confusing stuff.

Anyway. We almost never watch TV so we've certainly never had a subscription to a streaming service, which has actually proven to be a bit of a social liability since lots and lots and lots and did I mention lots of everyday conversations sooner than later end up centering around the streaming TV shows everyone but me is watching. But the bone spur in Mom's shoulder is about to improve my social life exponentially -- YAY! -- because it prompted me to buy a smart TV and subscribe to Netflix to keep Mom occupied in her recovery and since I am drawn to the point of crippling distraction like a defenseless moth to a flame every time I'm near a TV -- which is the reason I avoid turning on any TV anywhere ever -- I will now end up bingeing on entire seasons of House of Thrones and Game of Cards and The Handmade Pail and everything else on Netflix every time I enter the living room while Mom is recuperating. I. WILL. BECOME. SO. POPULAR.

Unfortunately, the coaxial cable nipple in the living room wall appears to be dead so we can't watch the cable channels we never watch but we're nonetheless already paying for on the new TV. And as we're now the last family in this and three adjoining galaxies to find out, the "free" "smart" channels that "come with our new TV" involve complex opt-in and -out setup processes and out-of-nowhere commercial interruptions and I'm so frustrated by all that dark-magic "smart TV" chicanery right now that even as a non-TV watcher I'm about to scream so WE NEED OUR CABLE NIPPLE TO WORK.

But first: I have to pick an outfit to wear to the hospital tomorrow for Mom's surgery because you just KNOW there'll be someone there taking selfies to post on his blog.
Posted by Jake at 10:10 PM

SENSE8. You will never again leave the house.