THIS is what's happening 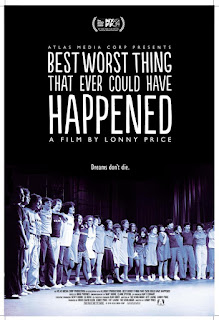 1. I just got my mom a smart TV for her to watch during her shoulder surgery recovery
2. I also just subscribed to Netflix on our new smart TV, which finally dragged our family kicking and screaming into the 21st century of television watching beyond basic cable
3. I have been dying to see the documentary "Best Worst Thing That Ever Could Have Happened" since well before the directors and producers even thought to make it
4. I have "Someday Just Began," which is a quote from "Our Time," which is a song from "Merrily We Roll Along," tattooed on the inside of my left biceps
5. I kid you not
6. Because I would never joke about Sondheim
7. Because I can quote the sacred Book of Sondheim by chapter and verse
8. Which I do often
9. Especially in random texts I've been exchanging with my ex since the day we met 10 years ago
10. It's our private shorthand for sharing pretty much everything that happens in our lives
11. Oops -- I wandered off
12. Anyway, I just found out last night that "Best Worst Thing That Ever Could Have Happened," which is a documentary about the creation and heady experience of being a part of "Merrily We Roll Along," is available on Netflix
13. Which, I remind you, I now have
14. On, I remind you, our welcome-to-the-21st-century new smart TV
15. I have no plans tonight for the first time since the Carter Administration
16. My mom and dad are gone tonight
17. Which means I have the house and the smart TV and the Netflix all to myself
18. OHMYGOD OHMYGOD OHMYGOD
19. Since I've been planning on seeing this documentary someday, someday is definitely just beginning tonight the second I get home
20. Commence Total Sondheim Geek Out In 3 ... 2 ... 1 ...
Posted by Jake at 8:00 AM