I'll be stripping down to my fancy underwear again this year to raise money for the Chicago Gay Men's Chorus' Big Package Auction fundraiser at Sidetrack on May 8. I don't know if that will inspire you to show up and bid on our fabulous travel/spa/entertainment/merchandise packages or stay home and hide behind the couch with a Bible and a can of mace.

Either way, here's this year's promo video featuring underwear-clad footage of last year's event. I might also appear in it as as one of the implied-to-be-naked package-holding dudes who flash in and out of the background. Clearly, I can be flattered into stripping down for anything that involves standing around in my underwear in a bar.

We’re back from our Broadway overdose!

And I owe you reviews of all the shows we saw and catty comments about all the celebrities we ran into.

And I’m fully aware that by “I owe you” I actually mean “I intend to write but you have no obligation to read or even care about” but “I owe you” sounds more like my ramblings provide actual value, which helps offset my crippling self-image issues about the mole on my foot. Plus it makes that first sentence easier to embroider on a sampler.

In the mean time, I leave you with a picture of the dog we stayed with in New York. This is Q: 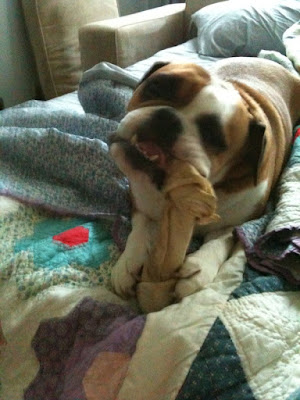 Q lives with a handsome college friend of mine and his equally handsome husband in their fabulous Art Deco sunken-living-room-and-arched-doorway Chelsea apartment. And Q has a bone. And he wants to make sure that you know he has a bone, so he shows it to you from many different angles and with many different grunts and whimpers so that there is no chance that you will miss the fact that he has a bone. He doesn’t want you to tug on it or take it from him or throw it for him to fetch. He just wants to make absolutely sure that you know he. has. a. bone. Plus if you take him for a walk in Chelsea, he will attract legions of muscular, well-moisturized men who will want to say hi to you. Bone!
Posted by Jake at 5:42 PM No comments: 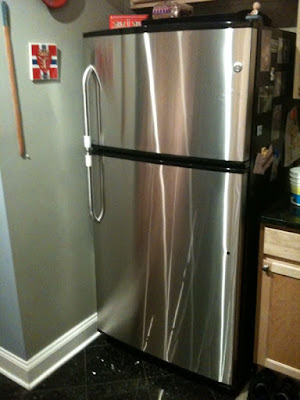 It actually makes cold! Unlike our old refrigerator/freezer, which stopped accomplishing cold-related tasks a week ago … just in time to ruin the Easter aspic. Which we didn’t make because we don’t celebrate Easter and I’m not even entirely sure what’s in aspic. But if we were Easter aspic eaters our non-cold-making refrigerator/freezer would have left us in a fine how-do-you-do.

Now avert your gaze from its fine shiny surface long enough to notice how it sits nestled next to a wall. (A wall covered in artifacts of my Norwegian heritage, which makes it a cool wall. But that’s not the point of this paragraph.) Now try to picture our old side-by-side refrigerator/freezer sitting next to that wall. Now try to picture us opening the left side-by-side door about a quarter of the way for three freaking years because that’s as far as it would open because that’s what happens when you’re a moron developer who designs a kitchen in such a way that you put a side-by-side refrigerator/freezer right next to a goddamn wall.

Thankfully, the moron developer installed a cheap-ass side-by-side refrigerator/freezer that lasted a whopping six years before it had to be replaced by a sturdy, EnergyStar-rated, non-side-by-side refrigerator. So though we hadn’t really wanted to drop more than a thousand dollars on appliances in the week before we drop a couple thousand dollars on a whirlwind Sondheim festival on Broadway—we leave in the morning!—we can at least open our goddamned freezer when we get back.

You may remember that we also had to buy a fancy new washer/dryer in February when the cheap-ass one from the cheap-ass developer stopped making motion and heat. And nobody wants to buy just one unplanned, unbudgeted-for major appliance in a three-month period. Nobody. Thankfully, we bought them from the same place. And thankfully and the domestic partner has the kind of balls I lack—the kind of balls that get you a sizeable discount on your second major appliance purchase in three months when you remind the lady on the phone that you bought the first one at full price.

Top 10 reasons I haven't updated my blog in decades

1. I’ve been kickin’ it old skool
I have no idea what that actually means, but it sounds younger and hipper than I’ve been lollygagging around.

2. I’ve discovered Words with Friends
It’s the iPhone version of Scrabulous, which was Facebook’s legally-squashed-by-Hasbro version of Scrabble. And it is now my #1 favorite way to be unproductive. I usually have 10 to 15 games going at a time, most of which I play on the bus to and from work (which is where I used to read Time, Newsweek and The New Yorker so I’m now so far behind on my current events that I ask you to let me know the moment Lincoln gets home from the theater). It’s also been a really good way to tune out Judge Judy, the #1 home-TV-watching guilty pleasure of a certain domestic partner who shall not be named here. If you want to play with me, open a game against NofoJake … and send me a message to let me know who you are!

3. We’ve been cleaning house
And by “cleaning house” I mean vacuuming up colonies of dust bunnies that literally looked like mountains of pillow stuffing under our bed, schlepping entire carloads of clothes, furniture and electronics to the Brown Elephant, and sorting through mountains of paperwork from banks, investments, insurance companies and our many ceramic figurine collector clubs.

4. I have spring allergies
Speaking of dust bunnies, my spring allergies have kicked my ass this year like a bully on a gayground. They knocked me out so hard this weekend I took a four-hour nap on Saturday and a six-hour nap on Sunday in addition to the eight hours of sleep I got every night. And I’m still stuffy and sleepy and cranky and about eleven other potential dwarf names. But I just took a Claritin so I’m on my way to being Claritin Clear™! At least I should be at some unspecified time that is presumably in the near future, according to the vague promise on the packaging.

5. I’m shaving my legs
As my trainer inches me closer and closer to my giant-bodybuilder vanity fantasies, I have actually started piling on some measurable muscle mass. (Alliteration runs rampant!) I’m currently up to 205 pounds (from the 195 base weight I’ve maintained for the last 10ish years, give or take the months on either side of a marathon). Most of my new weight seems to be in my legs, which are actually so big I can’t wear two of my favorite jeans anymore. Woot! And now that I feel like I’m actually getting big, I’m further feeding into my giant-bodybuilder vanity fantasies by shaving my legs like all the big kids do at the gym. And shaving meaty legs takes a freakishly huge amount of time. Plus when you’re naturally hairy you have to maintain your shave virtually every day. Plus when you’re naturally pasty you have to slather on self-tanner all the time so you don’t scare children and interfere with the light refraction on the Hubble Telescope.

6. We’ve been tackling long-overdue home projects
There were so many not-quite-dones on our unofficial to-do list that I finally typed everything in a two-page document, organized it by the rooms in our house and taped it on the kitchen cabinet were we can be reminded of our self-imposed obligations every time we feel the urge to collapse unproductively on the couch with a jar of marshmallow fluff and a spoon. By my unofficial count, we’re a good 5% through the list, but that’s farther than we’d be if we didn’t have a list. Our biggest accomplishment this weekend: We finally hung the curtains in our guest bedroom, which will be occupied by my family when they come to stay with us for my birthday.

7. I’m turning twice the legal drinking age
Speaking of my birthday, I’ll be a whopping 42 in less than two weeks. Which means I’m too old and tired to deal with newfangled things like “blogs” and “technology” and “jazz” and “Sarah Palin.”

8. I keep getting blood tests
One of the fun parts of getting older is watching your body slowly fall apart. My body’s newest trick: low thyroid output and high prolactin output. Which means new medications. And endless blood tests to monitor how the medications are (or aren’t) working. I’m so full of needle punctures I’m holier than the pope! Especially because I don’t help priests fuck little kids!

9. I’m planning a birthday party
If you live in Chicago, come to show tunes at Sidetrack on April 18 and look for us near the Liza cake in the south bar. We’re starting around 4:00 and going until we’re all jittery from carbs, sugar, fat and Dreamgirls clips. But be warned: This is a show-tune birthday, which requires show-tune flair. So to show respect for my age, you need to show up in your Cats T-shirt or your Les Miz button or your Damn Yankees cap or your A Chorus Line legwarmers or you can simply re-create Barbra's orange-and-fur “Don't Rain on My Parade” ensemble. Or if you want to go low-key, just show up with your best friend Stephen Sondheim.

10. I’m a tranny hot mess
Again, I have no idea what that means. But it sounds younger and hipper than I’m too gender-confused, sweaty and rumpled to write in my blog.
Posted by Jake at 3:02 PM No comments: