I haven’t even run for a bus since I took off my specially fitted, custom-orthotics-enhanced running shoes at the end of the Chicago Marathon in October.

So when a friend asked me to be on his 12-person team to run a 36-hour, 200-mile relay from Madison to Chicago three weeks from now, I wisely said no … though I told him if he got desperate he should ask me again and we could talk.

I never heard back from him, but then a different friend asked me to be on his team … and then he asked again … and again.

And I thought about it long and hard. I weighed the pros (bragging rights, cool race shirt, forced cardio just in time for spring, make new friends) and the cons (no foundation of training, 15 new pounds of bodyweight [good bodyweight, just for the record] to propel through space and time, sleeping in a van with strangers, pooping who knows where) and I decided against it.

But then I did the math. I’d be expected to run three eight-ish-mile legs with breaks as long as it takes 11 other team members to run eight-ish miles each. And I can usually ramp up to eight miles within my first month of marathon training each spring. Plus it’s a hellofa way to kick off marathon training for the summer.

So I said yes. Hesitantly.

And my initial burst of regret tinged with slight panic was ameliorated when I received the runner breakdown and discovered that as runner number 9, I was responsible for three legs of only 6.5 miles each. Which is totally doable. I think.

So last night I started training. I dug out my specially fitted, custom-orthotics-enhanced running shoes, unlocked my hamstrings, stripped down to a pair of shorty running shorts (hey, I didn’t eat right and get plenty of sleep and lift weights to put on 15 new pounds for my health) … and realized as I headed out the door that I hadn’t charged my grotesquely expensive GPS running watch. But I churned out three-plus miles with relative ease … though my quads and abs made sure I knew that my last mile was very unfamiliar territory after six months of enduring nothing but squats and crunches.

And when I got home and scrubbed the stink off so as not to repel my poor domestic partner into the more redolent arms of a homeless junkie, I sat down to read through the event rules and other runner information. And I was shocked to discover the complete anarchy under which the race will be run:
Seriously. If the relay organizing people can’t be bothered to follow basic rules of grammar and capitalization, I can’t guarantee I won’t loudly announce what I’m doing when I shit on the side of the road.
Posted by Jake at 8:11 AM No comments:

How to survive the dentist

1. Pee. Being trapped for more than an hour with an entire Teamsters union plus all their industrial-grade tooth-pulverizing tools crammed in your mouth is not the time to discover your bladder is painfully full. So take a moment to make a pre-emptive pee before you climb in the chair.

2. Sit still. Apparently I spent the early moments of my filling-replacement procedure on Monday wiggling my feet to distract myself from the fact that four adult human hands plus two suction tubes plus an assortment of super-glue-strength bonding compounds plus a rock-boring drill borrowed from the Manhattan subway expansion project were wedged in my delicate little mouth. I wiggled so much that my dentist’s assistant eventually had to ask me nicely but firmly to sit still. Like a big boy.

3. Breathe through your nose. Despite recent advancements in suction technology, water and pulverized tooth bits and probably clumps of leftover pudding from a nearby grade-school lunch program will puddle in the back of your mouth as your cracked old fillings are being drilled out of your head. Resist the urge to think about how easily this gunk could become a fatal choking hazard. Or to valiantly compare yourself to a waterboarding victim.

4. Don’t bite your tongue. It will be numb to the point you won’t even be sure you even have a tongue. Especially when you’re pumped full of enough Novocain to mask the horror of two filling removals. Keep in mind that your teeth are designed to chew meat. And your tongue is meat. So keep whatever bit of it you’re aware that you still have away from your molars.

5. Reward yourself with something nice when you’re done. My dentist is across the street from the Mac store. I went home Monday night with two new fillings, partial control over my lower face and one of these pretty kitties: 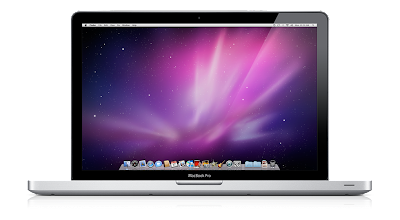 1. Forgetting to wear red. Though there is a red star on my fancy reversible belt buckle and my trendy shoes have red detailing. For those of you inclined to oppress us Norwegians with your selfish ignorance of our rich, lutefisk-and-sweater-based culture, Syttende Mai—literally “The Seventeenth of May”—is Norwegian Independence Day, which celebrates the day Norway declared itself to be an independent nation from those oppressive Swedes in 1814. I have no idea if wearing red is any official way to celebrate this day, but I’ve always worn a red shirt on May 17 so I could be my own one-man Borgertoget. Except today, obviously. But I am wearing a pale gray shirt that pays tribute to the pale white palette of Norwegian foods and food-covering sauces. So there’s that. Ett språk er aldri nok!

2. Getting two fillings replaced. I haven’t had a cavity since junior high school, so these dull silver bad boys in my molars have to be almost 30 years old. My dentist says they’re cracked, and since the gums around these teeth always bleed when I floss, I’m inclined to think it’s time to go under the drill again. Traditionally Norwegian Independence Day is not celebrated by attacking Norwegian-Americans with drills, but replacing fillings carries with it a high probability of wearing a paper bib with blood on it. Which equals red. Which equals Norwegian pride. Vær vennlig og snakk saktere!

3. Writing my monthly blog post. Seriously, I have no idea why I’ve been so not-bloggy lately. I’ve had a ton of adventures to write about. And tons of snarky thoughts I wanted to share. (Sarah Palin was in Chicago last week! Which means puppies died and blood ran out of our faucets and thinking people got scabby rashes on our asses.) And I’ve even enjoyed two stay-all-day-in-front-of-the-TV days in the last month. Which means I’ve had time to write. Or time to be a complete vegetable. But since vegetables are good for you, the TV won. Luftputefartøyet mitt er fullt av ål!
Posted by Jake at 10:54 AM No comments:

I made all kinds of awesome blog posts and posted all kinds of awesome pictures while I was there. But they were in … um … Euros so they didn’t translate to most American computers. Sorry if you had gotten the impression that I’d just abandoned my blog in favor of sitting around watching TV for weeks and weeks. Because I’d never get that lazy about blogging. Ahem.

I have three huge announcements to make:

1. I turned 42 while you weren’t looking. My bosoms have officially drooped and gone dry. I’m currently tucking them in my foundation garments so they don’t bounce around and hurt people when I walk.

2. I stopped drinking soda. Because my trainer told me to. About ten thousand times. I had my last bubbly, delicious glass of chemical refreshment the night before my birthday. And I think I actually had withdrawal symptoms for the first week. I’m a reformed junkie! Tomorrow will mark three weeks of sobriety, and I think I deserve some kind of medal or coin or dead hooker or whatever it is they give out to mark such milestones in other reformed-junkie support groups.

3. I switched from plastic gym water to metal gym water. My trusty plastic water bottle had seen me through two marathons and almost two years of lifting. It was really just a Powerade bottle I hadn’t thrown away because it had a built-in grip that was easy to hold through the sweatiest runs and a wide mouth that was easy to refill from any drinking fountain or hose or municipal toilet. Despite my best attempts to ignore the obvious, though, the inside of it had started to smell as sour as George Rekers’ boy-hooker-stained underpants. And I kept stumbling on more and more scary reports that my well-used bottle was already leaching polyethelene phthalates into my uterus and giving my unborn children mushy little Palin brains. So I finally broke down and bought a non-fetus-deforming stainless steel bottle in a hypermasculine gunmetal gray color to complement my hypermasculine demeanor and gunmetal gray pallor. Here is a candid shot of the two bottles meeting right before the old one went to the “retirement home” next to our garbage can. It just puts a lump of heartbreaking sorrow in my polyethelene phthalate-drenched uterus: 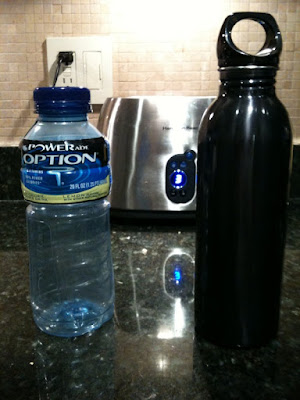 P.S. How awesome is our toaster? It has a digital toast setting … in a hypermasculine blue!
P.P.S. If I ever formed a drag band, I would totally call it Polyethelene Phthalates and the Estrogenic Compounds.
P.P.P.S. I wasn’t really in Europe. But I totally have a girlfriend who lives in Canada.
Posted by Jake at 5:51 PM No comments: