Chicago emerged from its devastating Great Fire on October 10, 1871, after a two-day conflagration that destroyed 17,500 buildings over four square miles, left 90,000 of the city’s 300,000 inhabitants homeless and killed an impossible-to-quantify-accurately 200–300 people.

And the city immediately began rebuilding.

Thirty-two years and two months later, after rising both literally and proverbially from its ashes to reclaim its place as one of America’s most populous and vital cities, Chicago was devastated by another fire … this time in the month-old, state-of-the-art, “fireproof” Iroquois Theatre. 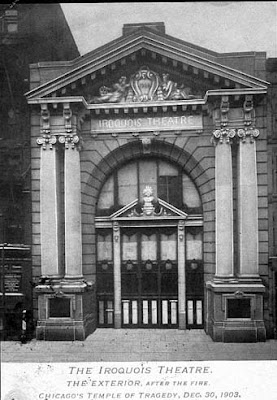 When it opened on November 23, 1903, the Iroquois Theatre was hailed as an architectural masterpiece and a jewel in the crown of Chicago’s theater scene. Designed in the highly ornate French baroque style, it featured grand staircases, gilded ornamentation, lush velvet curtains and a 6,300-square-foot domed auditorium with a dropped stage to improve the sightlines from every seat in the house. And though it was billed confidently as “absolutely fireproof,” the Iroquois contained almost no fire-safety features. No fire alarm. No backstage telephone. No labeled fire exits (most exits were hidden behind velvet curtains anyway). Even its supposedly fireproof asbestos curtain was made of a highly flammable wood pulp. (Less than ten years later, the “unsinkable” Titanic would succumb to a similarly overconfident hubris.) 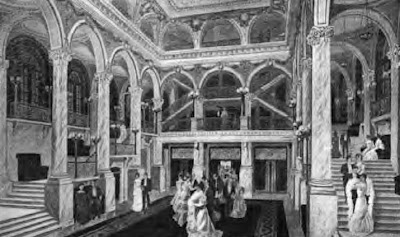 The theater’s opening production was a touring musical pastiche called Mr. Bluebeard, which featured a 400-person cast and starred popular Vaudeville comedian Eddie Foy. It had enjoyed critical and popular success for over a month when its December 30 audience filed in on a freezing Wednesday afternoon during the break between Christmas and New Year’s Day. Since the theater’s opening had been delayed repeatedly, its owners were desperate to make up for lost revenue, so they habitually oversold the house, seating extra patrons up and down the aisles in the orchestra and balconies.

The fire started at the top of Act II when an overhead light shorted and sent sparks leaping to a nearby curtain. As the fire spread through the flylines and burning bits of scenery rained down on the stage, the actors continued soldiering through their performance, confident in their understanding that the theater was fireproof. A handful of people in the audience got nervous enough to leave, but many chose to stay in their seats (or aisles) until it became obvious the fire was not going to be contained.

And then panic set in.

The ensuing stampede up overcrowded aisles through an unfamiliar theater with hidden exits left trampled bodies everywhere. And since most of the Iroquois exit doors opened inward, the bodies piled up in front of the doors, leaving no hope of escape.

The actors, too, created their own stampede to find exits. And when they finally pried open the giant freight door on the north end of the stage, the arctic winter blast that blew into the building combined with the fiery gases above the stage to create a superheated fireball that exploded into the auditorium and incinerated everything in its path, including hundreds of people still in their seats.

Many of the people who did manage to get out of the building found themselves trapped high in the air on unfinished fire escapes. As these fire escapes got more and more crowded, people begin to fall (or jump) to their deaths in the alley below. By the time the fire was over, bodies were piled 10 deep in what is still called to this day Death Alley. 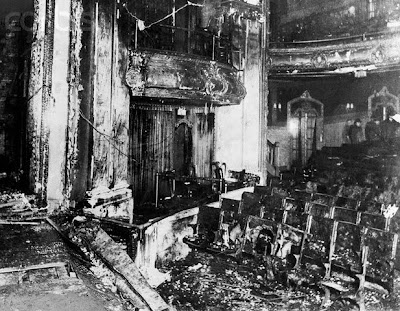 Though it was contained to one building and it burned less than an hour, the fire killed over 600 people (twice the number killed in the two-day Great Fire of 1871), shut down theaters around the world out of fire-safety concerns (leaving thousands of actors and theater employees unemployed), generated worldwide outpourings of sympathy, exposed yet another Chicago corruption scandal in the years of ensuing lawsuits, and ultimately brought about great changes in the way we respond to massive disasters and catalogue and identify disaster victims. It even inspired an Indianapolis hardware salesman named Carl Prinzler, who randomly had to miss the deadly performance, to invent what he called the Self Releasing Fire Exit Bolt once he learned that a disproportionate number of victims had died in desperate piles in front of the inward-opening exit doors with confusing European-style bascule locks. Known today as the “panic bar,” his invention—along with outward-opening exit doors—are perhaps the biggest public-safety legacy of the Iroquois disaster. 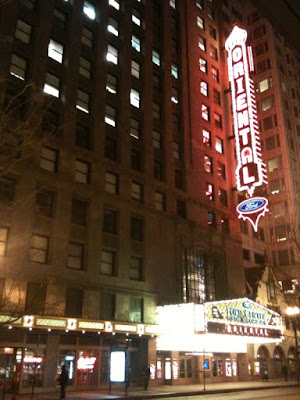 Today, the stunning Asian-baroque Oriental Theatre sits pretty much on the exact footprint of the Iroquois Theatre. A thriving part of the Broadway in Chicago theater collective, it features touring productions that play year-round to thousands upon thousands of theater patrons who largely have no idea that they’re sitting on a historic graveyard of sorts. To my knowledge there isn’t even a memorial on the property commemorating the fire. 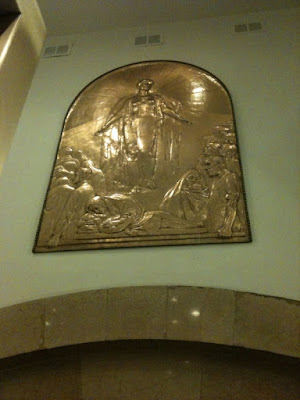 There is a memorial about three blocks away, in Chicago’s classical-revival City Hall building. Designed by Chicago sculptor Laredo Taft, the bas-relief plaque currently sits above a glass column that houses a revolving door, so it’s both hard to see up close and hard to photograph, especially with an iPhone. 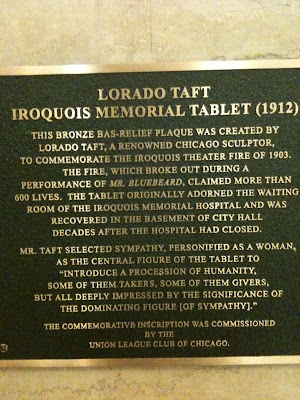 Thankfully, it’s accompanied by an eye-level plaque that explains it context and memorializes the 600 lives lost on December 30, 1903, in one of the worst theater disasters in history.
Posted by Jake at 3:58 PM 3 comments:

Jake never updates his blog
Jake is a lazy bitch. But writing endlessly clever, upbeat blog posts is exhausting. Fortunately, Jake has a couple complaints he’d like to air. And those things are always more fun to write about. So now he has a blog post to post!

Bees are liars
My spring allergies have escalated in the last few years to be spring Sinus Headache Smackdowns™! I can usually manage (but never eliminate) the excruciating sinus pain and pressure through the magic of pharmaceuticals, but I’ve always been on the lookout for something more permanent … or at least more effective. A buddy of mine who’s all holistic and shit recommended last year that I buy a jar of locally grown organic honey and eat a tablespoon of it every day for a month. His theory was that I’d ingest minuscule particles of the local allergens that inflate my head like a helium-filled otter every spring and slowly build up my own natural immunity to them. So I’ve been eating a tablespoon of the stuff every day since February 1. First impression: Organic honey is hyper-sweet. Second impression: Organic honey is gross. Third impression: Organic honey doesn’t work. I just survived an epic Sinus Headache Smackdown™! that lasted more than a week, and all I have to show for it is elevated blood sugar from eating hyper-sweet honey with a damn spoon every day for over a month. On the plus side, I got my annual Sinus Headache Smackdown™! in March instead of May, so spring is probably on its way early. Woot!

Stress fractures never really leave you
I have one in each foot. They usually re-snap (or whatever the medical term is) late in every marathon season. And they let me know they’ve re-snapped via their distinctive pattern of pain across the tops of my feet. I can’t recall whether it was when I was kicking Donald “Gays don’t deserve equal rights” Trump in the face or just wearing some stiff new shoes, but I somehow managed to make that distinctive pattern of pain appear across the top of my right foot again last week. But if it was from kicking The Donald, it was totally worth it. Fucker.

Newt Gingrich is a whore
Nobody needs a lecture on the "sanctity" of marriage from a mulitply divorced adulterer, Newt.

The New Yorkers won
Like most subscribers, I let myself get a little behind on reading my New Yorker magazines. So I had a little pile here and a little pile there, all just waiting for me to re-snap a stress fracture and use my down time to sit and read and read and read until I was all caught up. But then I noticed my little piles filled two drawers in my bureau and completely hid everything on the side table by the bedroom TV. And when I finally decided they’d reached critical never-gonna-get-read mass over the weekend and I assembled them in one single pile, I discovered I had more than a yard of unread New Yorkers mocking me from every nook and cranny in our house. But no more! Two trips to the recycling bin later, I now have stronger magazine-schlepping arms and way more room in the house for other trinkets. Like my unread Newsweeks.
Posted by Jake at 8:55 PM 3 comments: