Follies: Oh aren't I proud to be? 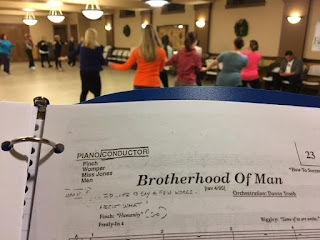 Guess who just got cast as Finch? Not me. Because I'm WOMPER, the coolest rhythm-challenged nerd-boss in the history of rhythm-challenged-nerd-boss-themed musical theater! (And lest you think I'm lodging a passive-aggressive complaint here, you're wrong. Because I'm stoked! And not just because I get to be in front.)
I've always wanted to perform this song, but without the tedious chains of most of the rest of the show. And now I get to! In front!
You, ya got me! Me, I got you! As my backup singers! Booyah!

Get your tickets and come see me in Follies!
Posted by Jake at 5:41 PM No comments: 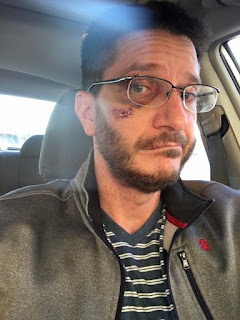 I'm back at work after my whirlwind vacation at Headwound World. I'm wearing my new coat from Mom, my new shirt from me and my old backup glasses, which are embarrassingly eight years out of date and have a bad habit of sliding right off my nose and toppling onto whatever I'm doing. Fortunately, we have yet to encounter this problem in the bathroom.

One caveat: if you are an international supermodel applying to make out with me, please note that my upper right lip -- which I almost completely bit through at Headwound World -- is still rather swollen and quite painful and is preventing me from doing a thorough job of brushing the front of my upper right teeth. Please complete your Jake Make-Out Application Packet as usual but -- if you are approved for the program -- you'll now have to allow up to five minutes beforehand for me to find a mint. We assure you this situation is temporary and we regret any inconvenience this may cause you. Thank you for your consideration.
Posted by Jake at 8:30 AM No comments: 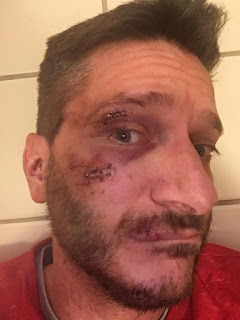 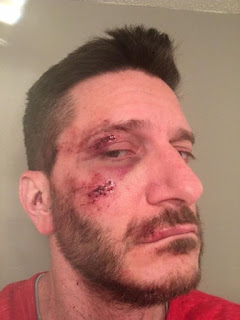 So this happened last night. And my head and my brain are in such screaming pain right now that I feel compelled to type this very slowly on here before I attempt to escape the pain with sweet, sweet sleep. I'll give you all the blood-soaked details when I wake up and the pain subsides and my eyes uncross.

But I will tell you that one of the three cops involved was really cute.
Posted by Jake at 12:30 PM No comments:

Depression will tear you down. But the world can help you up.

Depression will tear you down from happy to despondent in a matter of minutes and will pin you there with its hands on your throat and its knees on your chest so you can't breathe and you can't move and you can't think and you eventually can't even summon the will to care.

It will override your sense of reason and convince you that despite any evidence to the contrary everyone hates you, you're better off dead and you'd better figure out how to get that way soon or you'll just prolong the agony and the hopelessness and the fact that you just don't matter.

It will make you lonely and defeated, desperate for some semblance of validation through a lunch date or an actual date or a party invitation but too scared and awkward and exhausted to follow through until people stop inviting you anywhere because they know you won't show up.

It will dig in its claws and fight to the death the drugs and the counselors and the hospitalizations and the electroconvulsive therapy you eventually turn to in desperation as you endure irritating and embarrassing and possibly permanent side effects and withdrawal effects on your frustrating, endless quest to remember what normal feels like and to attempt to reclaim it.

It will compel you to write alarming texts to your friends and repeatedly, off-puttingly post your graphic, brutal, unfiltered, unapologetic thoughts on social media in a futile attempt to explain yourself, empty your head, get to sleep, try to normalize whatever the fuck is wrong with you so you can finally overcome your choking sense of isolation and think readily and lucidly and productively and walk the earth with confidence and never never never spend another moment foggy and dark and despondent and immobile and alone and sleeping sleeping sleeping and fucking scared you'll do something stupid when you should be breathing and laughing and eating and participating and loving and feeling loved and just goddamned fucking LIVING.

But you know no matter how bad it gets, it will still give you moments and days and maybe even weeks of reprieve where you can see where you need to be, feel what you need to feel, do what you need to do, and memorize this precious knowledge so you can hopefully look at your next attack objectively and learn how to ride it out and minimize the damage and maybe even be embarrassed enough to apologize for the profanity and the disturbing imagery you use when you're buried up to your neck in lava and you're trying to claw your way out and explain yourself so people will understand and maybe help you or at least embrace you flaws and all and help you regain your footing, your dignity and maybe your place in this bright, friendly, joyous world filled with people and places and experiences eagerly waiting to welcome you with wide open loving inviting arms.
Posted by Jake at 11:43 PM 1 comment: 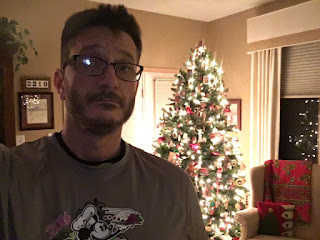 It's 11:30 pm and in this slightly dark and judiciously cropped tree selfie, Christmas at our house looks postcard-perfect. But in reality there are boxes and bills and blankets and coats and wet shoes and easily 20 bottles of meds and folding tables and stuff to clean up sick-cat barf and plates of half-eaten cookies and basically something that needs time and attention on every counter, table and square foot of floor space in sight. It's exhausting and defeating just to look at. And none of us is sure how it got this bad.

But in the big picture, it's small stuff. And it really doesn't matter. I moved home two years ago in part to take care of my dad. And I'm thrilled to do it. I drove him to two doctor appointments today and helped get him changed for an X-ray and we drove to the hardware store to get him a rubber tip for his cane and we had lunch and got some Christmas stuff and took our kitty -- who is actually pretty sick -- to the vet, where he proudly told the doctor that HIS dad had been a vet, and it was an honor and a joy that I'm here to take care of him. And tomorrow we start all over again with two more doctor appointments and more Christmas shopping and probably lunch and I'm going to remember and savor every moment of it because when he's no longer here I can look back and say "I took care of my dad. And we had lunch. And we laughed at dumb stuff. And he told me stories about my relatives and what cool old buildings used to stand where in the city and where he and Mom lived before I was born and which of his friends who've died he really misses and how he hates to be blind and I took care of my dad."

And that street runs two ways. I've been on a two-year emotional roller coaster of bipolar highs and debilitating lows and lengthy hospitalizations and miserable, crushing side effects of taking and withdrawing from maybe 30 psychotropics (which, all things considered, I still think is a really cool word) and quite literally sleeping my life away as we try to find a med combination that doesn't make me unstable and embarrassingly fidgety and relentlessly, overwhelmingly drowsy. And my mom and dad have been my super-advocates all along, organizing my ever-EVER-changing meds, making up a bed for me on the couch on the days I can barely crawl home from work, making sure my insurance is up to date and I'm not missing a dizzying array of doctor appointments with a dizzying array of doctors and making me pot roast and Jell-O with fruit in it and in general just being awesome.

But we're not special; millions of families are facing millions of medical problems, some easier than ours and some crushingly harder. And millions of families also have messy houses, especially around the holidays. And there's a glaringly obvious metaphor in there that can be interpreted in positive or negative ways. For me, it's all good. We'll get the house picked up and back in order soon. My mom will eventually forgive me for announcing to all of Facebook that we live in pestilence and squalor. I'll get my meds -- and my brain -- straightened out. Mom and Dad will or won't get sicker or better and I'll be right here to take care of them.

And my slightly dark and judiciously cropped tree selfie might not show our struggles and messes, but it totally captures all the warmth and joy and love and -- I'm sorry -- really ugly ornaments in this house, in this family, in this world of uncertainty and unfairness and hope and fierce, unbreakable devotion.
Posted by Jake at 11:30 PM No comments:

Happy birthday to my wonderful brother-in-law and father to my children. Well, technically, they're not MY children but I love them more because I used to buy them candy on the sly when they were much younger because THAT'S WHAT UNCLES DO so keep your self-righteous judgey condemnation to yourselves, you judging judgeypantses. Where was I? Oh, yes: My brother-in-law has raised two decent, thoughtful, informed, involved kids (one of whom will bake chocolate-chip cookies at the drop of a hat and the other of whom will consume all of them if we don't lie and tell him they're up on the roof so he should go look there while we secretly (and maybe guiltily) eat all of them), obsessively power-washed his driveway on every day that ends in y, missed a few big sportsball games on occasion so the rest of us could watch musicals populated with frolicking men in ill-fitting tights as a family, and volunteered to climb the high, scary, pants-wetting ladder so I could stay safely close to the ground on the low, scary, pants-wetting ladder when we painted his house. Most importantly, he has always, without fail or even slightly crumbling resolve, shooed the entire family out of his kitchen so he could do all the dishes -- even after the 14-course state dinner we hosted for Angela Merkel just because we enjoy saying her name -- and thus saved me from having to do dishes, which I hate more than folding laundry or watching Donald Trump do that anus thing with his lips. So everybody call him at work today and sing Happy Birthday in whole notes so he can really savor the experience. And buy him gift cards from Michaels because that place gives him hives and I think if he could just buy some dried branches and styrofoam cones without using his own money, it could be like a gateway drug and he could conquer his fears and be making pipe-cleaner snowmen skating merrily on oddly shaped mirrored ponds by Christmas or maybe Epiphany for those of you at the end of the alphabet.
Posted by Jake at 8:49 AM 1 comment: