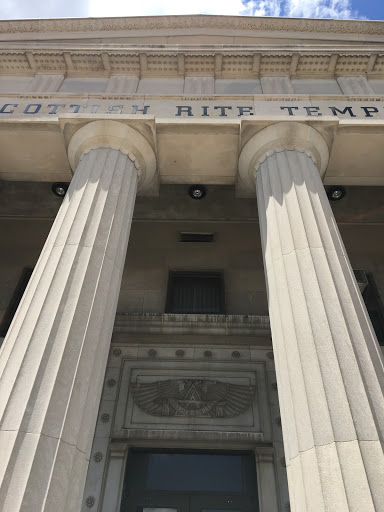 Cedar Rapids' austere Scottish Rite Temple is an icon of Neoclassicism just east of downtown. Built in 1927 of bone-colored limestone, it adheres resolutely to the architectural principles of the Classical Revival period: flat walls, shallow projections and recessions, and modest ornamentation. The central portico of the building adds the only measurable adornment to the building, with simple fluted columns, Doric capitals (smooth, pilllow-like tops to the columns), shallow fluted pilasters (flat, unstructural columns used as decoration, often to add vertical movement to a short space) on the pediment (the triangular roof held up by the columns), and a low bas relief eagle sculpture over the door. 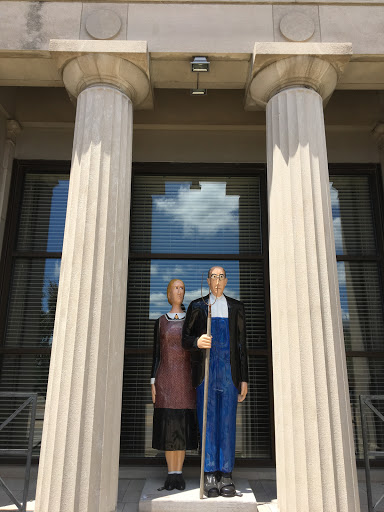 Cedar Rapids native and American Gothic artist Grant Wood was a Mason and a brother in the Temple, and the Masons have installed statues of the two American Gothic figures in the smaller east portico in tribute to him. I, too, am a Cedar Rapids native, and I have studied and learned everything I can about and loved American Gothic since I was a kindergartner at Grant Wood Elementary School. I even met Nan Wood Graham, Grant Wood's sister and the model for the female figure in the painting, when I was a student there. And Dr. Byron McKeeby, Grant Wood's Cedar Rapids dentist, was the model for the male figure, though he died 18 years before I was born. But the figures feel like old friends to me, and I didn't think Grant Wood or either of them would mind having them pose for a group selfie. So we all just did. 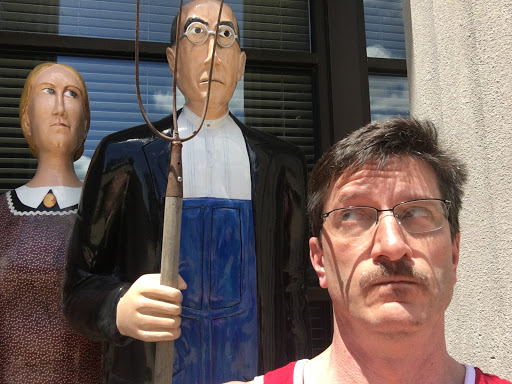