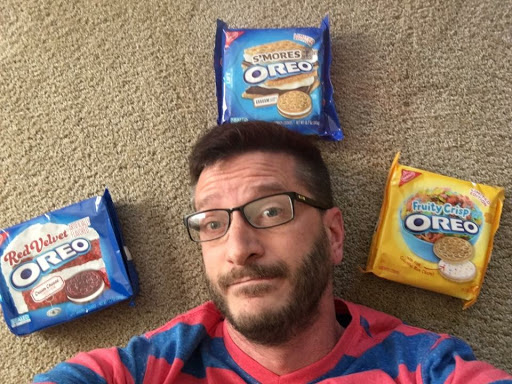 JULY 1, 2017:
A year ago right now, the not-entirely-tongue-in-cheek bipolar cycle -- including the binge-eating of Oreos -- that I described in this Facebook post was a regular part of my life, mixed in with painful ramp-up and withdrawal cycles from a constantly changing cocktail of ultimately ineffective meds.

Six months ago right now, I started yet another new med with a by-then defeatist predisposition to thinking it wouldn't work, just like all the meds before it. It almost immediately gave me an instant-onset blackout so severe that I crashed to the tile floor and ended up in the ER with a deeply lacerated face, loose teeth from biting through my lip and a concussion.

But then the new med started working. And while I waited for it to fail like all the meds before it, it actually kept working. And now -- six months later -- I've had only a handful of relatively minor bipolar episodes. Plus I've been able to show up for work and run errands and honor all the commitments on my calendar. My doctors are scheduling my visits at longer and longer intervals. I'm more present in my family's lives instead of sleeping all the time with my head under a pillow. I'm back to having intense gym workouts almost daily. And for some reason this is my gold standard of success: I'm doing shows again. And not only am I doing them but I'm opening my third back-to-back show this weekend. And I know my lines and my choreography without having to think about them and I'm letting myself believe that I'm doing a good job and people like me and I'M LOVING MY LIFE AND IT'S ALL WORKING THE WAY IT'S SUPPOSED TO.

A year ago I honestly didn't think I would ever feel so amazing for such a long amount of time. I honestly didn't remember what it felt like to enjoy life without effort or interruption so that you didn't even notice you were doing it ... or wonder when it would all collapse again. A year ago I knew people liked me but I didn't believe it ... or at least I didn't trust myself to believe it.

I'm so glad this memory popped up on Facebook  today. I had six more months of struggling and falling ahead of me after I posted it. But after that I've had six whole months of happiness and connectedness and functionality and honest emotion and feeling like my old self -- or at least the old self I wanted to feel like.

And I haven't even been hungry for an Oreo for at least half of those six months. Which means the cycle is officially broken.
Posted by Jake at 8:09 AM