You will LEARN YOUR GRAMMAR! 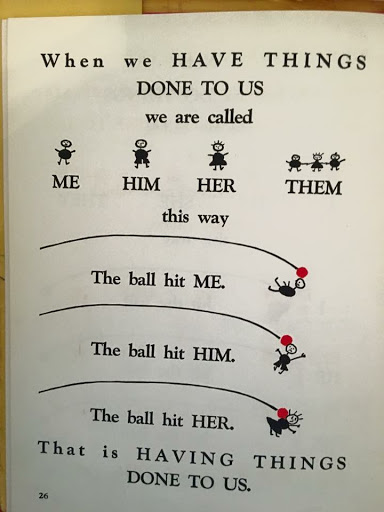 My mom grew up in an era where apparently grammar was a blood sport, brutal playground violence was passively dismissed as "having things done to us" teachable moments and multiple pronouns led inevitably to multiple concussions. Naturally, she became an English teacher. 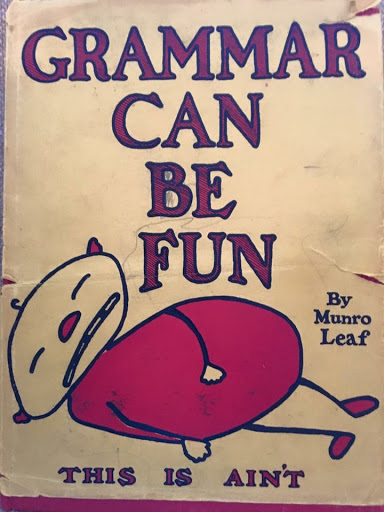 Her childhood "Grammar Can Be Fun" death treatise eventually landed in my impressionable autodidactic orbit, where I couldn't tear my eyes away from dead cockroach-ogres named Ain't and racist caricatures of Chinamen named Ing and inkblotty little spider-people who were doomed page after page to suffer horrifyingly violent deaths at the hands of invisible sharp-shooting hitmen who beaned them into broken, disfigured blots of catastrophic medical trauma using blood-red balls the size of their heads, or what was eventually left of them.

The book filled my young, sponge-like mind simultaneously with nightmarish horror; a lack of inspiration to draw any better than an alcoholic third-grader; and a damn-the-infidels, take-no-prisoners zealotry for parallel verbs, drafty kerning and horribly racist gerunds.

But it made me the man I am today: a needless-punctuation-eschewing, shameless-vocabulary-flaunting, always-silently-judging, endlessly-trump-mocking lapsed grammar columnist and grammatically conscientious tweeter who obsessively re-edits Facebook posts and who can't bring himself to forward even the most brilliant of memes if they contain negligible punctuation errors.

Oh -- and I also write stuff for a living.