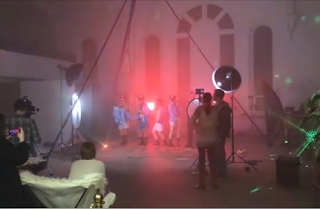 I spent last night dancing to "It's Raining Men" like a shameless, wanton stripper with five half-naked cop guys in a massive photography studio filled with smoke, disco lights, towering Palladian windows, a stripper pole within pants-throwing distance, and multiple photographers and videographers. Which is nothing new, really. I mean it WAS a Tuesday.

Then I spent the early morning practically grunting in pain with the first migraine I've had in probably 15 years. I'd forgotten how the pain can be so breathtaking it almost chokes you. It was so bad and I was so near-delirious that even though I knew I needed to get out of bed and find any pain medication I could get my hands on, I was afraid I wouldn't be able to stand up and I'd collapse on the floor, which would be measurably worse. Or I'd get lost in the dark, because I knew from experience that the last thing I wanted to do was turn on any lights.

Now I'm at work exhausted, groggy, still in lingering pain, overdosed on acetaminophen because I can't take Ibuprofen with my psychotropics, and ingesting caffeine all but intravenously. So hello, Wednesday!