I'd finished my classes for the semester and my dad had come to pick me up from college for the holiday break. 1988 had been an emotional roller coaster for our family. We'd lost four family friends in a small plane crash Easter morning, my mom had undergone a radical mastectomy in October and she was just starting her first rounds of chemo before Christmas. I was in the middle of my junior year in college, and I'd finally found a major I was willing to stick with: English. But since I'd waited a full two years to admit to myself I always should have been an English major, I had a lot of catching up to do. And my first-semester courseload had been heavy.

December 21 is the winter solstice–the day of the year with the shortest amount of sunlight—but it was nevertheless beautiful and sunny in Eastern Iowa that afternoon in 1988. And Dad and I had a nice chat over the 40-minute drive home. My family has always been close, so when we saw Mom standing in the driveway as we pulled up to the house, I figured she was just excited to see me.

I assumed she'd gotten some bad news about her cancer while Dad was gone, so I jumped out of the car before it even came to a stop and I ran up to hug her. But the bad news was something entirely different: Miriam’s plane had gone down.

Miriam was a friend of mine who had spent the semester in London studying under the auspices of Syracuse University. I’d gone to visit her over the Thanksgiving break, and we’d had an awesome time seeing the sights, exploring the museums and taking in all the shows we could afford on our college-student budgets. Among the four we saw were Les Misérables and the extraordinary revival of Stephen Sondheim's extraordinary Follies. Sondheim was just starting to appear on our collective radar, and we both agreed that seeing Follies together was a mountaintop experience for us to have shared over our magical week together in London.

But by December 21, I'd come home, a whole month had passed and I’d been so caught up in my finals and holiday preparations that I’d had no idea Miriam was flying back to the States that day—much less what flight she was on. Neither had my mom. But our friend Jody in Ohio did. And when the initial reports that Pan Am flight 103 had disappeared out of the sky over Lockerbie, Scotland, started washing over the newswires, Jody had called everyone she could think of.

Mom and Dad and I raced to the family room and crowded around the TV that crisp, sunny Iowa afternoon to see what we could find out about Miriam’s plane. It was the early days of CNN and 24-hour news, so we were able to get (spotty) information right away about the mysterious crash, along with grainy images of the wreckage shining dimly in the emergency lights that were working so hard to pierce the solstice blackness six time zones away.

In the years since Miriam's murder, I've befriended her parents and friends. I've gotten in touch with the roommates she lived with in London, none of whom had been on her plane with her that day. I've written pieces about my relatively removed perspective on the bombing that were published in newspapers and scholarly journals and read on NPR. And since I had been in London and had hung out with a lot of the Syracuse students a month before the bombing, I've actually been interviewed by the FBI.

And as I've grieved and matured over the last 22 years, I've discovered that I now tend to be efficiently emotionless when I hear about epic tragedies like the 9/11 bombings ... but I'll still burst into tears over emotional pablum like Kodak commercials.

Twenty-two years ago today, the world learned what a volatile mix misanthropy and religion and blind nationalism can be in a global melting pot.

Twenty-two years ago today, Miriam and her fellow passengers and their families and friends learned violently and unwillingly about harsh brutalities that the rest of the world got the relative luxury of absorbing over time.

Twenty-two years ago today, I learned that the distant tragedies that so often happen to “other people” should never be observed as abstractions. I discovered that news of plane crashes and acts of terrorism that play endlessly in 24-hour newscycles can be both disturbing and strangely comforting. I learned that life is precious, that there are no guarantees, that people who waste your time are just robbing you, that small gestures can make heroic impressions, that your pain and suffering and anguish and heartbreak do not make you special, that no matter how bad it gets you should find solace in the fact that it will probably get better, or at least easier.

Twenty-two years is enough time for someone to raise a child and send him or her off into the world. Enough time for five presidential elections and four new Sondheim musicals. (Six, if you count Saturday Night and The Frogs.)

It’s enough time for a gangly, unsure college boy to cycle through four cars and five houses and six jobs and three cities and one engagement as he grows into a successful, confident (more or less) man.

It’s enough time for him to realize that the world is not fair. That bad things happen to good people. That the bad people who did them don’t always get punished. That horrible tragedy gets easier to accept over time, though it remains impossible to forget.

I often wonder what Miriam would be if she were alive today. Famous actress? Influential journalist? Stay-at-home mom? She was among those people you just knew were going somewhere big with their lives. I’m sure that wherever the fates would have taken her, she’d be someone people knew about.

I also wonder if we would still be friends. We'd met that summer when we were singing and dancing in the shows at Darien Lake amusement park just outside Buffalo, New York. Our friendship lasted only seven months until she was murdered. I’m only barely in touch with the other friends I made at the theme park that summer. Though we still email, I haven’t actually talked to Miriam's family in years. Would she and I have drifted apart as well?

Since at this point I’m pretty much in control of our story, I choose to believe that by now I’d have sung in her wedding and helped her decorate her baby's room and given her a prominent link on my blogroll and kept her on my speed dial from the moment I got my first cell phone.

Twenty-two years ago today was the last, devastating act in a year that had shaken my family to its core. It was the day my worldview changed from naive to guarded, from optimistic to cynical, from insular to secular. It was the day my friend Miriam was murdered.

And though the world continues to spin forward—as it should—and people's memories continue to fade—as they do—I will never forget.
Posted by Jake at 10:15 AM 1 comment:

There’s never enough time
Wow. 17 days since my last post. And yet it seems like just yesterday I was waxing rhapsodic in this very space about the life-affirming benefits of my digital toaster.

In that time I’ve celebrated Thanksgiving with my family in Iowa, seen Million Dollar Quartet, planned and canceled a holiday pie party that nobody could come to, written a freelance article about gay men and social media for Zeus magazine, worked an alarming number of 12-hour days, and just this week formally launched my period of boundless holiday cheer (or at the very least less-dour-than-I-am-the-other-11-months-of-the-year holiday cheer) with my annual pilgrimage to hear Chanticleer sing in the mighty Fourth Presbyterian Church on the Magnificent Mile.

But I didn’t get any blog posts written. Which is probably why my daily readership hovers in the tens. (Hi, everyone!)

People are morons
The first thing you have to do—the first thing—when you enter our office building—or almost any office building in the Loop—is tap your ID badge against an electronic reader to prove that you’re a … well, I’m not entirely sure what tapping your ID badge proves, but apparently it keeps the entire building safe from disgruntled ex-employees. And Senate Republicans.

This ID-badge-tapping-obligation is there every day. EVERY. DAY. It’s not randomly enforced as some once-a-month safety drill. And the electronic reader never moves to a different part of the building on some days. So there is no chance any reasonably functional building employee could rationally greet his or her morning tapping obligation as some sort of never-anticipated-in-a-million-years surprise.

Every morning—every morning—some mouth-breathing cretin who’s more than likely just spent the last 30-plus minutes sitting on a train or a bus with the express purpose of coming to work in our ID-tapping-required building walks through the door, stumbles on the presence of the electronic reader, and only then commences searching through pockets and briefcases and purses to find his or her ID badge.

And guess where this mouth-breathing cretin stands to do his or her belabored searching? Right in front of the goddamned reader, that’s where. So the rest of us who possess more foresight than the average dead mosquito and who have our ID badges ready to tap the moment we walk through the building’s doors have to stand and wait while the mouth-breathing cretin proves to us beyond any hunch of a doubt that he or she needs to be trotted out to the sidewalk and shot in the head.

Go ahead. Ask anyone—at least anyone who’s reasonably functional—in our building if sidewalk head-shooting has never been contemplated in close vicinity to the electronic ID badge reader.

There are too many ruls 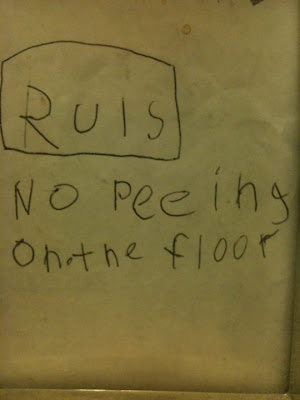 My nephew hand-lettered this sign years ago and taped it to his bedroom door after an unfortunate incident (which will not be described in any level of detail here to protect the reputation of an anonymous little girl) involving his younger sister peeing on his bedroom floor.

To what I assume will be his everlasting embarrassment, his mother—once she caught her breath after laughing like a deranged hyena … and presumably also after she cleaned the pee up from the floor—framed the sign and posted it in the powder room, where it shares space to this day with a framed (but not nearly as contextual) note hand-lettered by my niece, who had triumphantly catalogued the members of her family using her name, her brother’s name, “mom” and “bob,” which is not her dad’s name but we choose to think “bob” is more a product of her then lack of ability to distinguish between her b’s and her d’s, along with the totally unacceptable little-girl way she printed her a’s.

Or else she knows something we don’t.
Posted by Jake at 1:26 PM No comments: