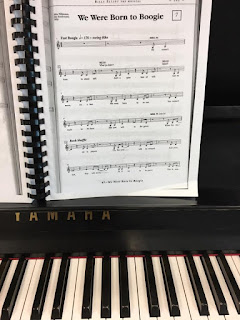 I'm a five-plus-years-out-of-practice piano player who just two years ago literally paid a guy to take my beloved but long-neglected piano off my hands so I wouldn't have to move it home from Chicago and store it indefinitely here ... and now I'm playing the rehearsal pianist Mr. Braithwaite in Theatre Cedar Rapids' upcoming Billy Elliott. And I told the directors no problem! I can learn the score and play live on stage so I don't have to unbelievably fake it while the orchestra pianist actually plays it for me! But please don't let anything be in sharps! Because sharps are the black jelly beans in the candy bowl of music! And everyone knows it! Even dead people who are decomposing! HA! Get it? Music! Decomposing!

Anyway! We had our first dance rehearsal tonight for one of the numbers I intend to play in the show and even though I don't have the piano score yet, the vocal score shows it's in C! No sharps! Not even flats! Just pure, well-composed (ahem) C. Plus it literally has "boogie" in the title so it's pretty much guaranteed to be basic three-chord progressions. Which is just one chord more than you need to play "Chopsticks." So I think I'm up for the challenge.

Unfortunately, my last five years of obsessive but admirably diligent thumb-texting do not equal anything resembling a sustained level of piano-playing dexterity. So I'll be supplementing my daily texting training with some rigorous scales and arpeggios for the next few months.

And while I don't think I've played piano on stage in front of anyone in maybe 20 years, I will be now! And I'm treble-y excited about it. Well, I bass-ically am. No, I am. I flat-out am.