I only roll eyes for you 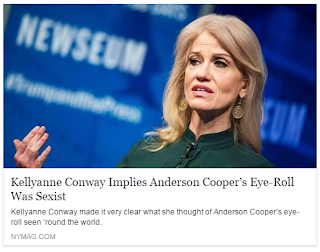 Check out the back of your head here

My biggest complaint is that you were at some point banned from CNN for all your desperate, belligerent lying and yet there you were again this week, like a recurrent herpes outbreak after a nice long dormancy. Your biggest complaint should be that you blew your big comeback and made a fool out of yourself again right out of the gate and then for good measure you went and whined on Faux News and made it all about YOOOUUU. I'd laugh and say never stop being you, but the fact is I can't stand you. The country was catastrophically imploding on itself just fine without all your pointless screeching and whining (now THAT was sexist!) but you had to ruin it all and get reanimated from the dead or crawl out of your goblin hole (now I'm just making fun of your looks! which is also sexist! but it's still just gonna be all about Anderson's eye-roll for you! because that gets you more cheap attention!) and it's been a couple days since the eye rolled 'round the world and you're STILL clogging my Facebook feed with all your pointlessness.

For the love of all things good and true, you really need to take a longer break before your next attempted comeback. Go somewhere nice. Treat yourself to some rest and rejuvenation. I hear Bowling Green is lovely this time of year.
Posted by Jake at 10:30 PM