Why are his trousers vermilion?

After work tonight I made a trip to my packed-to-the-rafters-with-everything-and-I-mean-everything-I-owned-in-Chicago-when-I-moved-home-two-and-a-half-years-ago storage locker with the faint hope of opening a handful of 30+ boxes and stumbling on four long-buried things: my passport, my running medals, my running bibs and some sort of documentation that shows the cost basis for some meager investments I made 30 years ago with a man who's no longer alive at a company that no longer exists.

Do NOT get me started on the cost basis documentation ... or the fact that it doesn't automatically follow your investments on their inevitable journeys through endless cycles of portfolio selloffs and acquisitions and companies that cease to exist. DO. NOT.

But! Look at everything I DID find: 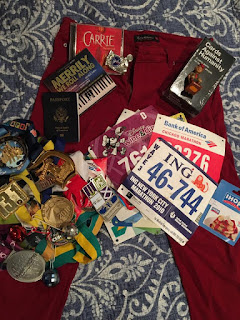 • My passport!
• My running medals! Which may or may not be jumbled up with a few random disco-ball necklaces!
• My running bibs!
• Plus! Clockwise from the top:
• Cards Against Humanity!
• A little figurine I bought in Barcelona 15 years ago of a folklorical boy squatting over a tiny, fresh pile of childish bad taste! Because why not!
• A $25 IHOP gift card!
• The abovementioned bibs and medals and disco balls and passport and let's get back to the fun stuff
• Long-forgotten-but-still-very-gay Broadway CDs!
• A dented York Peppermint Patty!
• BONUS! A pair of so-gay-they-make-their-own-obscure-Sondheim-references vermilion jeans that can't possibly have ever fit over my hips because right now they look like they won't even fit over what's left of my pride

There's also a massive unopened box sitting right next to me AS WE SPEAK labeled "summer clothes and shoes" that holds the promise of overflowing with something magical and/or even-more-pride-crushing since it was packed and sealed over two years and two waist sizes ago. I'd tell you I won't open it until later when it's not late and I'm not tired but we all know I'll be ripping into it before I even finish writing this po
Posted by Jake at 11:30 PM