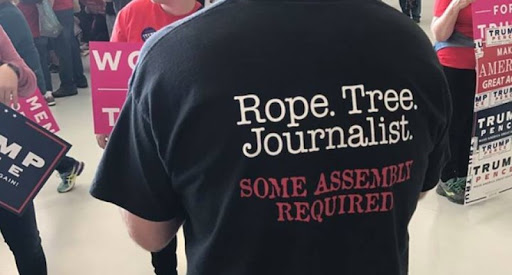 Call the legitimate press that does legitimate reporting on your legitimate words and actions "fake news" long enough and fake thinkers will treat that dismissive characterization as fact.

Note the pro-Trump signs in the background of this photo. Note the almost daily screams of "fake news" on Trump's Twitter account alone regarding the legitimate media's reporting on Trump's words and actions. Note that the American population of racists, KKK members, and people who explicitly or tacitly endorse lynching and other forms of shut-up murder are measurably all in what's left of Trump's base.

Javier Valdez, a reporter covering government corruption and the illegal drug trade, two weeks ago became the fifth such journalist to be murdered execution-style in Mexico in two months.

There are lots of similar legitimate journalists in America infuriating the "fake news" population. There is lots of open enthusiasm from that population over Montana Republican House candidate Greg Gianforte body-slamming a reporter who asked him a question about the Republican healthcare bill just this week. There is overwhelmingly lots of influence -- legally, Constitutionally and culturally -- over this population by the disproportionately powerful American gun lobby.

And these people have access to lots of both literal and metaphorical rope.
Posted by Jake at 8:33 PM