Fun facts about my nephew 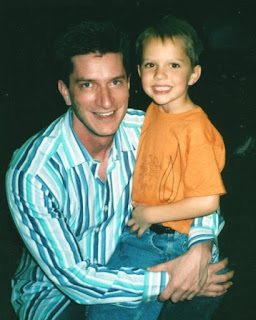 1. I've changed his diaper exactly once because for some reason when he was a baby and he needed changing, my mom was all "He POOPED! That's so ADORABLE! Let me change his diaper for him!" and she hogged all the fun.
2. He had a belly laugh that would put a mall full of Santas to shame, and it didn't take much to fire up his hearty laugh machine: tossing him in the air, making a funny face, poking him in the tummy and -- for some reason once he was old enough to talk -- just saying the word "envelope."
3. His head was so round and so bald for so long that I'm pretty sure when he was about five my sister traded him in for a kid with cheekbones and a tube of Rogaine because I totally don't recognize my nephew of today in the pictures of my nephew as a baby.
4. Once he could walk, I bought him some rain boots with feet decorated to look like duck bills and ankles decorated with duck eyes that he wore every chance he got until well after he outgrew them and his toes stuck out of the cracked rubber and the smell coming from them sometimes made him difficult to hug but for some reason I was proud to the point of tears that he loved them because *I* bought them for him.
5. He more than once wore those duck boots with a hard hat and a pair of safety goggles and went into a DEEPLY focused zone as he pretended to edge the lawn with his toy weed whacker. We adults kinda saw this as alarming but mostly saw it as a profoundly funny way to keep him quiet for remarkable lengths of time.
6. He loved fire trucks. FIRE TRUCKS! I bought him a fireman suit with his name on the chest one year for Christmas and I thought we'd have to throw buckets of water on him to calm him down after he opened it.
7. I'm a gay man and I have no innate knowledge about how to raise children -- not that those two are mutually exclusive -- but I had no idea how to incorporate the gay part of my life into his understanding of who I am as he grew up in a world of naturally heterocentrist assumptions. And whether he figured it out gradually or all at once, one of the greatest gifts he ever gave me was totally not caring one way or the other. And one of the second greatest gifts he ever gave me was his enthusiasm about making totally tasteless gay jokes with me as he got older.
8. I'd kinda hoped that as he grew up he'd see me as the cool best-friend/trusted-confidant uncle in whom he could confide the vicissitudes of his teenage angst or from whom he could get private, non-judgmental answers to his questions about girls (or boys, but it ended up being girls), but all I really ended up getting was the friend part. Which I'm totally cool with.
9. Every kid's age is the best age, but I'm firmly in the camp that right now is the BEST best age because it comes with thoughtful conversations and informed opinions about current events and inside jokes that are a few steps above using the word "underpants" and -- and this is my favorite part for some reason -- the exchange of texts filled with inappropriate humor and exponentially inappropriate memes that show I have successfully completed my avuncular mission to thoroughly corrupt the boy.
10. After a whirlwind few months of senior awards ceremonies and final choir concerts and poorly-attended-by-me baseball games -- which cap off a whirlwind 18 years of time-has-flown-by-way-too-fast-for-me-to-savor-each-moment -- my nephew graduates from high school tonight. And I know it's just a milestone in a family of lives filled with milestones, but this milestone carries the weight of signifying the end of his childhood, of his belly laughs, of his duck boots, of his fire trucks, of his joy over eating Mickey Mouse waffles when he visited me in Chicago, of his need for me to pick him up from school, of his influence on me to make sure I live my life in a way that he grows up with a good example to emulate and a proud memory to eventually look back on. We're certainly not done raising him -- and I still have a niece I need to finish corrupting before she graduates -- but right now I'm overflowing with joy and sadness and worry and calm and immeasurable pride that I got to play a part in raising such a kind, intelligent, clever, responsible, conscientious, loving, eminently outstanding young man.
Posted by Jake at 5:46 PM

How lucky the young man is to have you in his life.