Grab 'em by the premiums

I keep thinking NOW we've reached the ultimate low for the man-boy administration. Mocking a disabled reporter. Bragging about sexually assaulting women. Blatantly lying about an audit preventing him from releasing his taxes. Mounting evidence that he's colluding with Russia. More FBI investigations than we can keep track of. The exorbitant taxpayer costs of his endless golf vacations and dysfunctional marriage. Machinations to undermine the First Amendment. Flouting endless laws and safeguards and conventions designed to prevent financial conflicts of interest. Mike Pence. Proudly flailing around in a cloud of political and historical ignorance. Desperate attempts to discredit the media and blame Obama for his own catastrophic failings.

What bottomless holes will he drive us into next week? 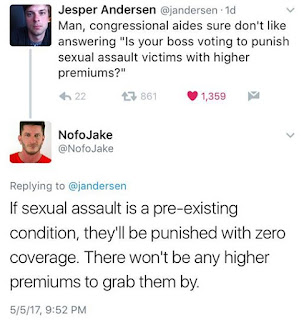