You probably don't recognize me behind this body mic. I'm also wearing a false mustache (which I just tried to spell as moustache but spellcheck zapped me with the Cattle Prod of Shame, though this is all beside the point) so you may perceive an imperceptible difference in the way I look. 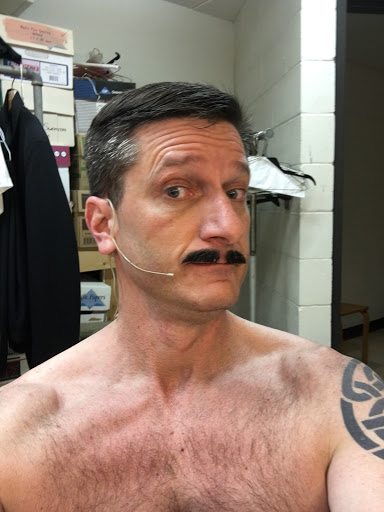 Anyway, I have something to announce that I've been keeping a highly disciplined secret for a couple months now: I'm in a show! And we just tonight completed our penultimate rehearsal, which means we have our final (or "ultimate" as they say in places where they use the word "ultimate") rehearsal tomorrow night ... and then we open our mere four-show run on Thursday. And here's a fun-for-the-whole-family idea: You should come see it! I'd tell you it's about an English woman pretending to be a Polish man pretending to be a French woman but you and I both know that's ridiculous. So here's the insider scoop: It's really about a gay French waiter who works on the side as a gay French choreographer and eventually works his way up the corporate ladder to don a false mustache and become a secretly gay Chicago mobster. The show is called Jake/Jake/Jake and you can find showtime and ticketing info here: Jake/Jake/Jake!
Posted by Jake at 11:00 PM