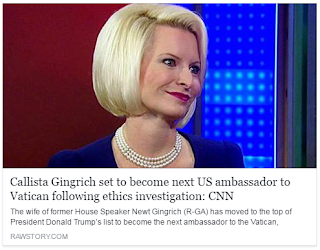 Learn how to send a whore to the Vatican here

Thrice (so far!)-married serial-adulterer Donald Trump, who just yesterday bellowed "In America we don’t worship government, we worship God!" to thunderous, effusive cheering at his commencement address at Jerry Falwell Jr.'s "faith-based" Liberty University and who today played golf instead of spending Mother's Day with any of the three mothers of his five known children, is appointing the one-time mistress and now third (so far!) wife of fellow serial-adulterer Newt Gingrich as the United States ambassador to the "faith-based" Vatican.

There are more faith-based family values on the bottom of my shoe than in the entirety of that last sentence.
Posted by Jake at 11:31 PM