He hid. In the bushes. Sean Spicer. An adult. HID IN THE BUSHES. 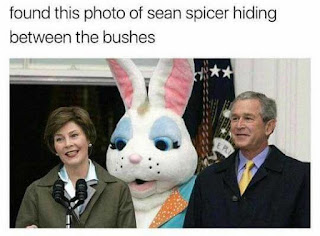 I thought this was an Onion headline the first time I scrolled past it on here. But Sean Spicer, the United States White House Press Secretary, ACTUALLY HID IN THE WHITE HOUSE BUSHES TO AVOID DOING HIS JOB OF ANSWERING QUESTIONS FROM THE PRESS ABOUT THE ABRUPT FIRING OF THE FBI DIRECTOR BY THE PRESIDENT HE WAS INVESTIGATING.

Sean Spicer hid in the bushes. Like a four-year-old. Or a cartoon chicken. To avoid doing his job for the president who hired him. The president who didn't fire him for his childish, nationally embarrassing dereliction of duties.

Are you appalled yet, Trump voters? Because I am. By all of you.
Posted by Jake at 7:00 PM