1. I don't know what my first takeaway is because the FAKE MEDIA knocked out our cable for the first hour and then we had to change venues at 10:00 so some snowflake could go to bed and the only catch-up I've been able to find online is the opening monologue where Jimmy Kimmel said black people were saving NASA and white people were saving jazz and Meryl Streep has been phoning it in for over 50 movies, all of which are clearly true because I saw it with my own eyes on screen and heard it with my own ears from my not-imbecilic president.

2. While we waited for the FAKE NEWS to lay off our cable, I was able to see some of the red carpet fashions on Facebook where OH MY GOD ALL THE WOMEN WERE SHOWING THE SPACE BETWEEN THEIR BOOBS AND WHAT THE HELL HOLLYWOOD WHY ARE YOU SENDING YOUR STARLETS OUT IN PUBLIC IN NECKLINES THAT PLUNGE TO THEIR PUBES SO EVERYONE CAN SEE THE SPACE BETWEEN THEIR BOOBS BECAUSE I DON'T GO OUT IN PUBLIC WITH MY FLY DOWN AND THE FRONT OF MY PANTS HELD OPEN WITH RUCHING AND DOUBLE-SIDED TAPE SO WHY DO YOU THINK IT'S OK TO DO THAT WITH YOUR STARLETS' NECKLINES YOU GROSS BOOB-SPREADING PERVERTS?

3. I love my Facebook friends and I constantly draw creative inspiration and pleasure from the endless parade of thoughtful, clever, witty and sometimes LOL-funny posts I find from you in my feed. But the Warren Beatty/Steve Harvey/Electoral College comparisons were ragged clichés before we even knew what had happened and I know we're all tired and it's been a long night and our eyes are all still bleeding from Halle Berry's Medusa costume and the knot of desiccated cats on Casey Affleck's head but it's 749 variations on the same theme as I scroll screen after screen after screen through Facebook so FOR THE LOVE OF BANNON please let's just get back to more productive things like making fun of our petulant, inarticulate man-boy president and trolling people online who are glad "La La Land" didn't technically win.

4. There is an exception to every self-righteous Facebook rant and it it this: 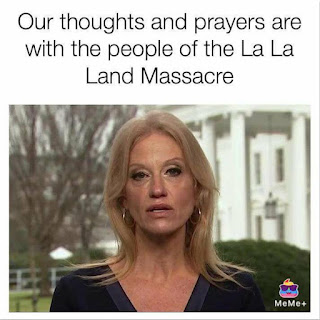