Awkward little gay boys who took their first awkward little steps toward fashion confidence in the '80s faced an unusually cruel uphill battle. And the broken dreams they left to rot and die along the journey smelled suspiciously of bleach. 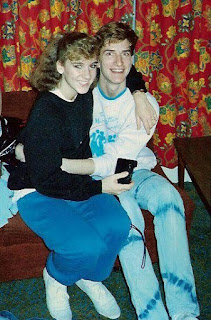 The hair: Sun-In is a friend to nobody. Least of all a dark-haired scarecrow with ghostly skin.

The shirt: I was a Manhattan Transfer freak in the '80s. And not just because I thought Alan Paul was totally dreamy. I saw them in concert only once, and I came home with a pale neon pink (because confident men wore pale neon pink in the '80s) batwing sweatshirt emblazoned with that forced-perspective tuxedo image from their eponymous 1975 album. In teal. And since there wasn't a natural fiber in it, the thing never faded!

The jeans: Reverse tie-dye! With bleach! At wacky angles! Like what a bar mitzvah clown might wear! In prison!

The curtains: Totally not my fault. We were poor college kids in a cheap Oklahoma motel room on our way home from being summarily rejected at a national Disney audition. What the hell do you want from us? Toile?
Posted by Jake at 7:00 AM