CAN THE ADULTS. PLEASE. SMOKE. 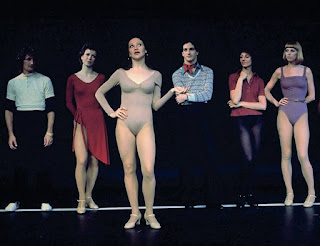 Though I'd yet to have seen the shows, "A Chorus Line" and "West Side Story" were probably the first two Broadway cast albums to capture my awkward-early-teen imagination; stare deep into my soul; imbue me with a reverent fascination with the production, performance and storied legend of musical theater; and open in my brain an unquenchable black hole of need to memorize every lyric, know every composer, belt every harmony, own every cast album and see every show even remotely related to the glorious, unexplored world of show tunes.

Sheila Bryant is the character in "A Chorus Line" who launches the despair-into-illusory-beauty trio "At the Ballet" with the pack-a-lifetime-of-pain-into-eight-words lyric "Daddy always thought that he married beneath him," which Kelly Bishop delivers on the cast album with a weary, matter-of-fact defeat and an old-school, over-the-orchestra belt that positively transfixed me as I made solemn vows to my early-teen self to one day captivate audiences with my acting, thrill them with my dancing and throw them against the backs of their seats with my big bold brassy Broadway belt.

I've had the distinct and unstoppably goosebumpy pleasure of playing Bobby -- Sheila's bescarfed neighbor in this picture -- in two productions of "A Chorus Line," neither of which was on Broadway but both of which still fill me with pride and awe and that one singular sensation that precious few people are lucky enough to experience in all its glittery, full-orchestra'd, grinning-elatedly-to-the-top-balcony glory.

And Kelly Bishop was one of the thousands of belty Broadway voices on the hundreds of memorized Broadway cast albums who inspired me to start the journey to get there.
Posted by Jake at 6:45 PM