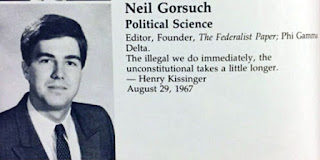 Remember how I said I was going to wait and let Neil Gorsuch's SCOTUS hearing help fully inform my opinion of him and his fitness to embody equitable jurisprudence?
That trying-to-be-impartial sentiment has now revealed itself to be an immutable alternative fact.
Neil Gorsuch and the Fascism Forever Club

It's not like he was just being a high-school douchebag looking for adolescent shock value; he was attending an elite prep school where presumably he was an intelligent, informed douchebag expressing sociopolitical conclusions he drew from his presumably elite, high-quality education.
It's not like he started his Fascism Forever Club just to joke around with like-minded douchebags; he founded what was by all accounts a formally recognized student group that was listed in his yearbook biography and he remained president of the club the entire four years he attended the school.
It's not like fascism is a ridiculous sociopolitical fad like the tea party; it's a governmental system led by a dictator having complete power, forcibly suppressing opposition and criticism, regimenting all industry and commerce, and emphasizing an aggressive nationalism and often racism. And its bloody and brutal doctrines were well-documented in his parents' lifetime during the 1922-43 fascist reign of terror carried out across Italy by Benito Mussolini.
It's not like he took these ideas with him to work in an uninfluential job after graduation; he took them to law school where they undoubtedly informed and biased his entire approach to law, public policy and the Constitution.
It's not like he's just a sociopathic abortion of a human being; he's about to be softballed through Republican-controlled confirmation hearings and ascend effortlessly to the United States Supreme Court.
And at only 49 years of age, he will be a key player in the social and moral devastation of our country for generations to come.

Hey Jake. Welcome back to the blog world. I have periodically checked to see if you have posted anything and was pleasantly surprised to find so many updates. You have been missed.