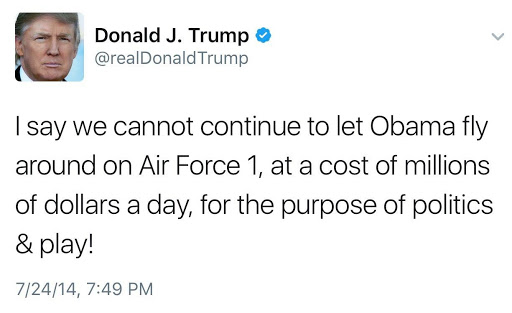 First of all, Obama shouldn't use Air Force One to "fly around" for politics? I know you have no FUCKING idea what a president does -- or even the conventional way the presidential plane's name has been written since 19 FUCKING 53 -- but politics (and diplomacy, which you slowly destroy with each private phone call and each joint press conference and each painfully awkward handshake) is the EXACT reason presidents "fly around" -- as a toddler would describe it -- on Air Force One.

And don't get me started on "play," you three-weekends-in-a-four-week-presidency Mar-a-Lago moron. I mean hypocrite. I mean liar. I mean asshole. I also mean demagogue, but you have no idea what that is. So I'll stick with asshole.

You're an adult. You have been an adult since the dawn of the Internet and the Information Age. You know that everything you write online is permanent and searchable and that when you're a prominent social figure -- even before you somehow become president -- every intellectually grotesque tantrum you voluntarily tweet will be found and used to hold you to the standards that you publicly and willingly establish by yourself for yourself.

You are too stupid to function in the public sector. You are too puerile to maintain reciprocal relationships of any public value. You are too morally and intellectually repulsive to manifest any public integrity. And you are beneath -- BENEATH -- contempt as any public figure.
Posted by Jake at 10:25 AM