I have a preexisting condition. Rick Santorum doesn't care. 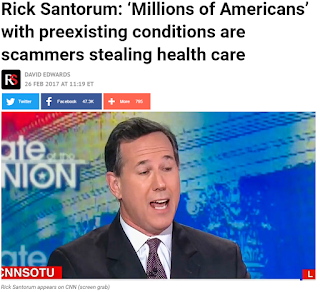 Scamming?
I'm bipolar depressive, and I've been bipolar depressive since long before I was finally diagnosed as such seven years ago. So I definitely, unquestionably have a preexisting condition. And when I learned years ago that because of this I was de facto uninsurable if I lost my job, it terrified me.
And then I lost my job.
Scamming? Thanks to the Affordable Care Act, I can get insurance despite my preexisting condition. My insurance is not subsidized through the ACA marketplace; I pay the hundreds and hundreds of dollars in monthly premiums, the thousand-plus-dollar deductible and the chokingly high co-pays entirely with my own money. I'm on four medications that cost over $1,000 a month. I see a psychiatrist once a month to regulate my meds. I see a kidney specialist every few months to monitor the potentially fatal side effects of my meds.
Scamming? Despite your 9-months-of-payments accusations, Rick, I am faithfully making a full 12 months of payments for a full 12 months of coverage. I SPEND ALMOST HALF MY SALARY FOR COVERAGE ON THE COMBINED ELEMENTS OF MY MEDICAL CARE, WHICH WOULD PROMPTLY BANKRUPT ME AND THEN FORCE TAXPAYERS TO PAY FOR MY EXORBITANT MEDICAL EXPENSES IF YOUR CONGRESSIONAL ILK REPEALED THE AFFORDABLE CARE ACT FOR NO QUANTIFIABLE-AS-OF-YET REASON BEYOND YOUR PARTISAN GRANDSTANDING.
And YOU accuse ME of scamming the system -- without a shred of evidence to support your lies, no less. You have a staggering amount of nerve, Rick. A staggering amount of repulsive, hypocritical, selfish, hateful, lying nerve.
YOU are the one who is scamming. You're scamming the religious community with your "faith-based" campaigns to destroy the families of gay people, immigrants and now sick people with preexisting conditions. You're scamming your vast low-information base that looks to you for moral and political guidance on matters regarding public policy, the common good, witnessing for Christ and basic human decency. You're scamming Trump's all-caps FAKE NEWS with your insistence that you bring value to the public dialogue on anything beyond your self-righteous narcissism.
You are a catastrophic moral and intellectual failure as a human being. And that fact is compounded by your desperate attempt to distract the country from your ethical bankruptcy by condemning me and every other taxpaying citizen who is dutifully and faithfully and responsibly managing preexisting conditions through the financially essential and morally right Affordable Care Act, which you -- again, without even hinting that you have or are willing to supply a shred of supporting evidence -- dismiss in blanket-statement Trump style as "a failure."
There is a reason you have been publicly vilified for well over a decade, Rick. And no feigned persecution complex can exonerate you. You are beyond contempt. You are beyond pillory. You are beyond malice.
And you'd better pray you're never beyond uninsurable.
Posted by Jake at 12:00 PM

From over here in Australia - where you would pay max around AU$6000 for subsidised private insurance, and the majority of your meds would be charged at a flat under $10 fee, and you would be entitled to probably 10 sessions per year at the psychiatrist for which you would get rebated about half the fee, whether you had private insurance or not - Obama care looks like merely a first step in appropriate health insurance, and the GOP lack of policy looks like the proverbial dogs breakfast. You can't get gay married here yet - but come on down, the health care is sweet.