I'm trying really hard not to call her Betsy DeVoid 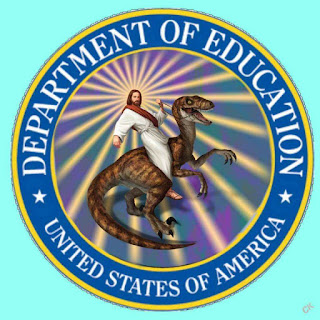 Using schools to "advance God's kingdom" missionary Betsy DeVos -- who 20 days ago went unblinkingly on record as advocating putting guns in schools filled with children in order to protect them from grizzly bears -- has an alarming and well-documented history of borderline hostility toward public schools -- going so far as to call them a "dead end" -- and toward teacher salaries, secularism, fundamental education standards and even universal federal protections for students with disabilities.
And despite her manifest lack of experience, knowledge and qualification to oversee and influence and shape our nation's entire public education system for the next four years -- starting with the fact that she's never been educated in a public school -- Betsy DeVos was laughably softballed through perfunctory confirmation hearings last month -- before which she had not even completed an ethics review -- and was today confirmed as our nation's Secretary of Education.
Because we as a nation cannot afford to have our children be more educated than our president.
Read all the gory details here
[Confidential to Donald Trump and Betsy DeVos: "Perfunctory" means "performed hastily and superficially as mere routine duty."]
Posted by Jake at 1:00 PM