Pardon my exhausting civic pride but it's jury-duty lunchtime and I rarely get to wander around the downtown area during the day with free parking no less and I'm totally not used to having a full-hour lunch break so I'm very efficient at eating which means I have a lot of residual time to explore and there's so much coolness here and I'm armed with a full phone battery and enough knowledge of local history and naughty-sounding architectural words like flying buttress and groin vault to bore you with endless mile-long posts like this one so if I'm picked for this jury I'm going to spend every lunch hour broadcasting my love for this area of the city that has risen majestically from the devastating 2008 flood and if I don't get picked then it's back to cat memes and indignant punctuation posts and god help us nobody wants that so you're welcome in advance unless I don't get picked then enjoy your cat memes!

SIDE RANT: I'm sitting in a charming little deli right now typing this post under a TV broadcasting a Trump press conference where he thinks desperately blaming Hillary Clinton and Barack Obama for nearly everything is far more productive than articulating his administration's essential policies and plans that he clearly doesn't have, he's obviously getting paid a dollar every time he says "very," he's spent a great deal of time equating Melania's long-ago and frequently pornographic modeling career with her current status as a "good person," he's actually declared that he's the least anti-Semitic person we've ever met in the entire world (which are words I'm just barely paraphrasing), and he's repeatedly sought out "friendly questions" presumably so he could take a break from using the words "fake news" to answer every substantive question he's asked. So -- this rant notwithstanding -- I'm going to keep focusing on the architectural history of my beloved hometown.

The first pictures below are the exterior and a look straight up the three-story atrium of the Linn County Courthouse, which was completed in 1925 on a three-block island in the middle of the mighty Cedar River: 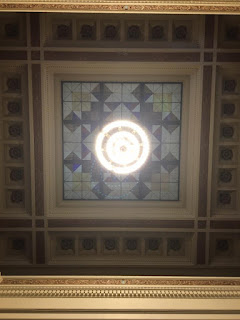 The building is a beautiful if slightly pared-down example of Beaux-Arts (say it: bozár) architecture, which emphasized symmetry and employed elements including flat roofs, classical architectural details like soaring columns and dentil moldings, contextual statues and murals, and a delineated hierarchy of spaces from noble entrances like the photo here to more utilitarian areas on the sides: 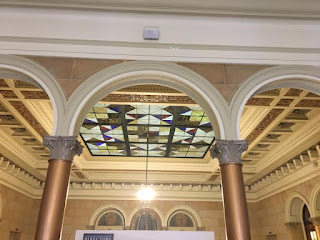 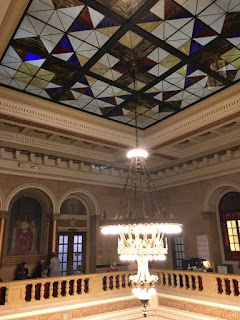 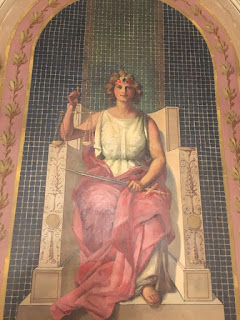 The pictures below are the rear of the Veterans Memorial Building, which is a more austere example of the late Beaux-Arts (bozár!) movement: 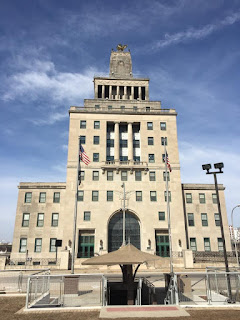 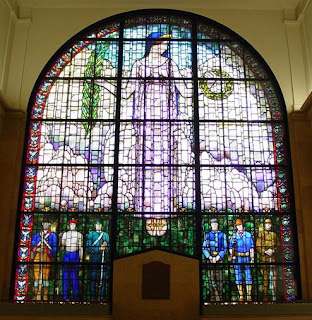 The building's two notable characteristics are the flame on the roof designed to be a near-exact replica of the Statue of Liberty torch and the immense -- and to my knowledge never named -- memorial stained-glass window designed by "American Gothic" artist Grant Wood. It features a central figure named the Lady of Peace and Victory (modeled after Wood's sister Nan, who was also the model for the female "American Gothic" figure) soaring over six soldiers representing the six major wars from the American Revolution to World War I. Every grade-school student in this city has made a pilgrimage to view this window, and I doubt you'll find any native who doesn't regard it with love and pride.

Back to the courtroom!
Posted by Jake at 1:00 PM