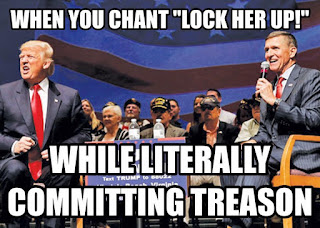 I think "literally" is technically still "allegedly" at this point. And since he was telling different lies about it to different people and digging in his heels about quitting just this morning, we still don't know the details, the extent or the lasting damage of his actions.

But Mike Flynn is a retired general who it seems intentionally put himself in a position where he knew he was violating the spirit -- but let's cut the bullshit and just agree it's the letter -- of the law by colluding with a longtime political and international adversary who was at the very least secretly taping his conversations and at the very most blackmailing him over them. And given his sycophantic fascination bordering on prostrate obsession with Putin and Russia, there is NOTHING Trump could say or do at this point to convince me or anyone capable of linear thought that he didn't know about it or wasn't orchestrating it. Flynn may be gone in title, but there's no way his resignation extricates him from the ramifications of his actions, closes the door on his probable blackmail, or snuffs out the unholy alliance he and Trump and fuck knows how many others have clearly started to forge with Putin's Russia.


But by all means, keep obstinately cheering for all things Trump and believing his orbit of racist oil billionaires even remotely cares about our country's interests and boycotting whatever company hurt Trump's feelings today and whining that protesters blocked Betsy DeVos from entering probably her first public school ever and getting angry when SNL calls Trump out on his shit and you on your proud fucking stupidity because look where all of your missing-the-point head-in-the-sand bullshit has gotten us.

Except I'll give you this: All of your missing-the-point head-in-the-sand bullshit clearly -- and so conspicuously that I want to spit in your face for being stupid enough to be smokescreened by it -- got the entire fucking Republican establishment to collectively and deafeningly shut up about Benghazi and Hillary's emails the millisecond the election was decided. So congratulations for that. 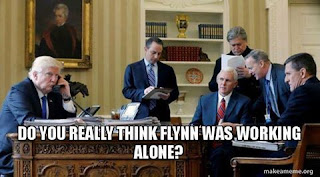