Today in Stupid: You don't even know what an I.Q. measures, dipshit 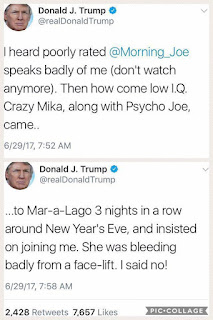 Judging from the comments on these posts, this is the epitome of tone and content that inflames the euphoric passions and defiant allegiances of your desperately subnormal base.

BUT YOU ARE UNFORTUNATELY FOR ALL OF US THE PRESIDENT OF THE UNITED STATES, and your lack of capacity for shame, judgment, maturity, impulse control, intelligence, ability and rudimentary adult behavior has turned our country into an international laughingstock that through what's left of our influence and economy is endangering political, financial and social systems around the world. You have a congress working overtime to strip affordable, vital healthcare from millions of poor sick people simply because it was given to them by a black man. You haven't bothered to fill hundreds of essential governmental positions from your cabinet to our country's global ambassadorships, which became an embarrassing liability when seven of our sailors were recently killed in a ship collision just outside of Japan. Your press secretary has escalated from literally hiding in bushes to escape the press that HE WAS HIRED TO ADDRESS to now banning cameras at the press briefings he manages to bumble through, while your congress has now blocked the press from talking to them in hallways. You keep deflecting the catastrophic failures you precipitate every time you breathe as "I inherited a mess" and you scream FAKE NEWS! like an uncontrollably shitting toddler every time your failures are brought to light. And instead of pulling yourself away from your grueling schedule of completely ignoring your wives and kids to fix any of this to the best of your feeble abilities, you tweet insults and gossip as though doing so were mature, appropriate, relevant, true or apparently in your disease-ravaged mind presidential.