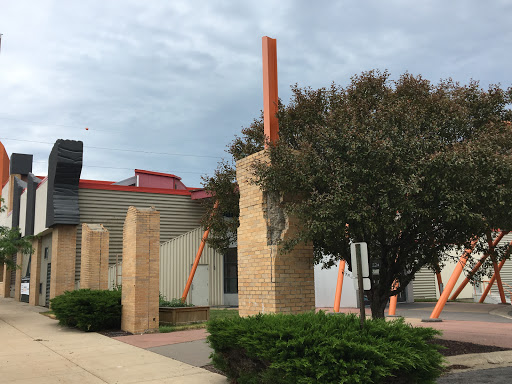 The old Cedar Rapids History Center was built in 1935 as a Quonset hut encased in industrially horizontal blond brick for the Rapids Chevrolet car dealership and stood resolutely as what seemed to be a permanent, demoralizing architectural stain on First Avenue at the edge of downtown until after I was out of college.

It was an exceptionally dreary example of early 20th century prefabricated architecture that was probably seen as austerely noble in its day and was unfortunately built to last well past its visual expiration date a decade later as the architectural world rediscovered the soul-nourishing properties of ornamentation.

So you can imagine how the city aesthetes rejoiced with great jubilation when the building started to be torn down in the 1990s, and then we waited with surprised but hopeful trepidation when we realized that what had brought devastating visual and emotional blight to the city for over half a century was not disappearing entirely but was instead being partially repurposed into delightfully contextual architecture: Ghosts of chipped-away pillars, arcs of corrugated metal and jagged geometries of pre-war brick suddenly stood with beauty, grace and a touch of fun as part of the endlessly clever new Cedar Rapids History Center building. And I quickly learned to stop sighing and looking away every time I drove past it. The new concept was quirky and invigorating and created a meaningful architectural dialogue between antiquated visual efficiencies and modern plays on scale, material and embellishment.

Last year, the Cedar Rapids History Center began its move to Cedar Rapids' historic 1896 Douglas Mansion -- whose adjacent carriage house at 5 Turner Alley was transformed in the 1920s into an apartment and studio by "American Gothic" painter Grant Wood -- and the History Center building was slightly renovated to become the new Cedar Rapids Day School. I'm kinda sad that the History Center abandoned its delightfully contextual hybrid-architecture home, but I still rejoice with great jubilation every time I drive by it.
Posted by Jake at 12:45 PM