No. I'm not done being furious about this. 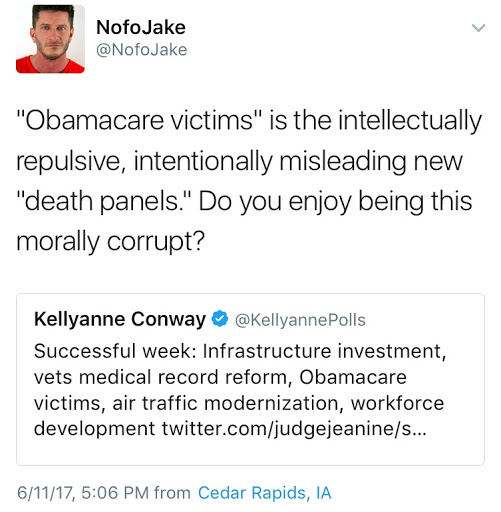 The ACA -- like any early-generation social program -- has its flaws, but it's designed to allow for those flaws to be addressed and corrected as they manifest themselves. The ACA has given millions of Americans -- including me -- reasonably affordable access to vital healthcare that was actively denied to us in the catastrophes of our country's supply-side healthcare model.

For you to actively -- HATEFULLY -- mischaracterize any sick HUMAN BEINGS the ACA may have failed as "Obamacare victims" to make them pawns in your divisive political propaganda instead of working to fix whatever failed them so they can get the medical attention they need is so beyond immoral and unethical that it should bring us all to our knees. And I'm so beyond tolerance for this administration that I'm not afraid to say I actively wish catastrophic medical victimhood on everyone who conceived of and works to perpetuate this moral terrorism.
Posted by Jake at 5:46 PM