If you thought you were finally safe from my unrelenting I'm-in-a-show posts, you're in for a big singy, dancy -- and now tappy! -- surprise. Because a mere 24 hours after my Victor/Victoria divorce was finalized, I've jumped taps-first back into my on-again/off-again affair with Billy Elliot. So to speak. And this time I think it will last. At least through July. 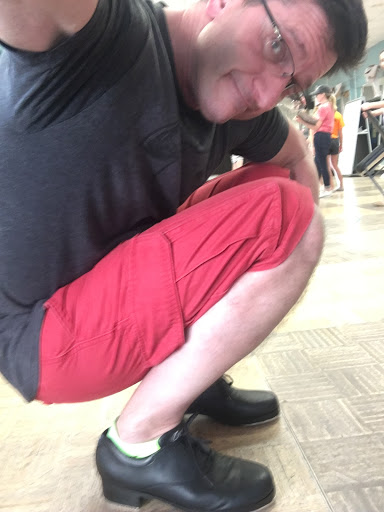 Anyway, here's my first-of-thousands rehearsal selfie of me in my beloved, super-awesome tap shoes that cost $200. But they've improved my tapping exponentially so I've gotten way more than $200 of happiness out of them ... along with some killer pullbacks. They're weighty and balanced and solid and perfectly hollow under the taps so they make resounding, satisfying, machine-gun-like THWACK sounds over and over exactly the way I want them to. If you think the perfect shoes can't be life-changing, I have some deliciously full-bodied paradiddles to show you. So to speak.
Posted by Jake at 8:00 PM