So when there's suddenly a handsome new pharmacist at the drive-through and he sees your tattoo and asks you tons and tons and tons of questions about it even though there's a HUGE line of cars waiting behind you and then he makes what you hope is more-than-just-chatty small talk as he rings up your four prescriptions and then he proceeds to ask you the perfunctory questions about each prescription that you and he both know only get asked when your dosages change which you and he both know they haven't and as he finally puts the bags of your meds in that little drawer that slides out to your car he brings up the tattoo again and you look and he doesn't have a ring but he does have a pretty spectacular smile and wow does he have a cheerful buoyant personality and you think if he just trimmed his beard a little he'd look great in the wedding pictures and he clearly already has all the information he needs to figure out you're bipolar so he'd know what he's getting into and then you're both totally out of things to say short of one of you awkwardly blurting out an invitation to dinner so you have to drive away and you have no reason to hopefully see him for another month, would you go get back in line for the drive-through and throw caution and possibly even dignity to the wind and awkwardly blurt out that invitation to dinner? Because I sat in my car in the parking lot for a while seriously thinking about it.

But instead I came home and took a shamelessly flexy selfie of the tattoo that started the conversation that got me all aflutter because I don't know why because I didn't know what to do. Sigh. 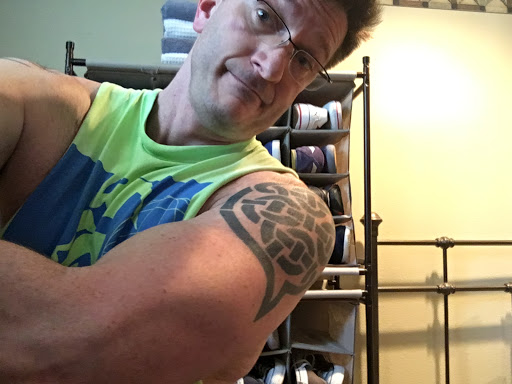 Email ThisBlogThis!Share to TwitterShare to FacebookShare to Pinterest
Labels: bipolar, dating, not fooling anyone, selfies, whining