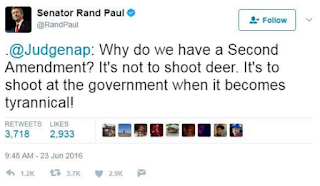 I don't even want to understand the vile psychopathy that caused you to think -- much less tweet to the world -- your Second Amendment justification to "shoot at the government" a year ago almost to this day. But you are the majority party of a president who just ten months ago called upon "Second Amendment people" to silence his political rivals ... the majority party of a president who blithely, recklessly bragged last year that "I could stand in the middle of 5th Avenue and shoot somebody and I wouldn't lose voters" ... a majority party who works resolutely to dismantle and obstruct gun-control legislation that might very well have prevented what happened to you and your colleagues today. Your words to "shoot at the government" are as appalling as the quite literal shooting at the government this morning that you now describe as "a killing field — it’s really sick and very sad."

I lost a friend in a violent terrorist attack. I lost a friend in a violent assault. I am haunted by the violent mass murders at Sandy Hook Elementary School and Pulse nightclub and countless other terrifying, preventable massacres. I don't wish violence and murder even on people for whom I have a visceral loathing. And I have a visceral loathing for you. For repeatedly -- proudly -- placing more importance on your party's interpretation of the Second Amendment and on the gun lobby and on allowing increasingly unrestricted access to assault weapons than on the safety and the very lives of our citizens. For recklessly inciting people through your position of influence and privilege to "shoot at the government." For having the gall to be shocked and appalled when the time bomb you helped build all but literally exploded in your hands this morning when an obviously disturbed man with obviously easy access to an assault weapon followed your charge and shot at the government. At you. At all of us.