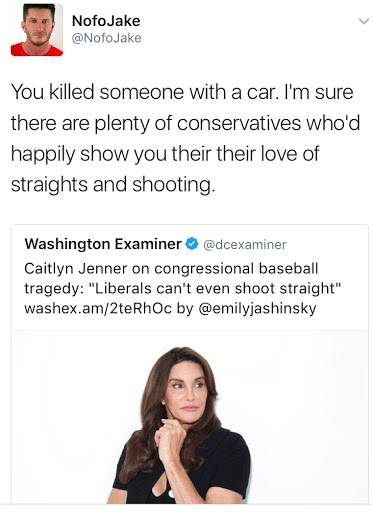 The party you delusionally declared your intention to create the position of "trans ambassador" for and who humiliatingly rejected you and everything you are hates you. Hates you. Amid domestic poverty, the acceleration of violent racism, international terrorism and many other threats that are of vital importance to address, they devote inordinate amounts of time writing legislation and pushing a party-wide agenda to segregate and humiliate and dehumanize you for trying to go to the bathroom. THE BATHROOM. And just wait for the vitriol they'll hurl at you if you try to marry a woman. Or anyone. As a trans person, you are barely human to them.

The trans-embracing left does nothing on that level of cruelty but expects a reciprocal level of compassion and human decency from you. Making opportunistic partisan jokes about attempted murder -- especially as a woman who has killed another human being -- shows there is no bottom to the absence of compassion and human decency that rots your entitled, self-important lack of a soul.

I am done defending everything about you over this statement. I stand up to and try to educate anyone who makes cruel or simply insensitive comments about trans people. You to date have generated the overwhelming majority of these conversations. And until this, I defended you despite our idealogical differences. But you are less than human to me now too. You are no better than the party you cling to who works so hard to loathe you. You deserve each other.
Posted by Jake at 7:16 PM