The trump trash from tonight's rally has pretty much cleared itself, though I did just hear a "grab her by the pussy!" yelled proudly to nobody from a passing car as I walked to mine after rehearsal.

Speaking of, I'd grabbed the first spot I saw when I got downtown tonight, which ended up being about six blocks from the theater in Kingston Square, a long-neglected neighborhood that's making a slow but gorgeous recovery after drowning in almost 10 feet of water in the 2008 flood. There is a layered boxiness that visually links the architecture in the area, from the 1911 People's Bank Building designed by Louis Sullivan in his fortressy "jewel box" style to the post-war brutalist commercial spaces clad in corrugated concrete to the new mixed-use residential construction profiled with broad crenellations and proud cornices. There is a relentless horizontalness to the neighborhood's rooflines and setbacks, and someone somewhere in the neighborhood's recent revitalization decided to trace all that horizontal geometry with simple, bright white lights. And the effect at night is at once austere, majestic and stunning. So stunning, in fact, that I go out of my way to drive through the neighborhood every time I'm in the area at night. I've stopped and parked and wandered around with my camera a couple times to try and capture the magic, but I could never find the right spot to capture the full expanse of everything I find so beautiful. When I got to my car tonight, though, I discovered I was in an ideal location to capture most of it, which -- since I've finally accepted that all that grand horizontalness is just too horizontal to squeeze into one picture -- is still perfectly breathtaking.

So here, after almost a year of attempts to find the perfect angle, is why I always reroute my nighttime trips through downtown Cedar Rapids to make sure I approach the area of 1st Street and 3rd Avenue SW from every angle: 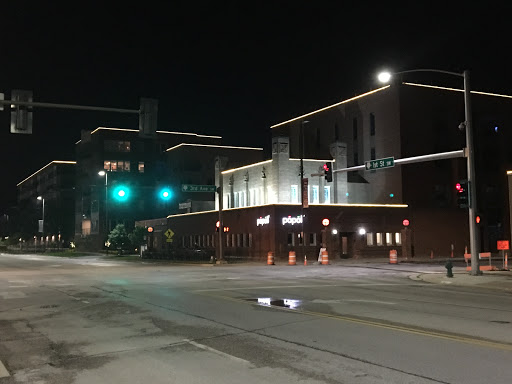