The D is for Draft Dodger 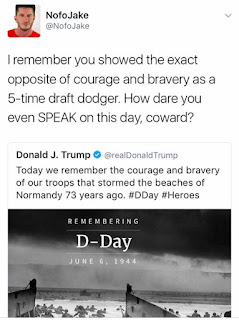 There's no way you even KNEW today was D-Day without some random staffer having accidentally seen it on your Selfish Entitled Cowards of 2017 calendar. And it's troops *who*, you pants-wetting black hole of emotional need. You're (at least on paper) a grown man. If you're going to pretend you're nobly fighting for isolationist American nationalism and issue such a heartfelt tweet (Wow! A whole tweet! With a PICTURE!) about the American sacrifices that have grotesquely allowed you to become the American president, LEARN TO SPEAK AMERICAN.

GOD! There aren't enough words in all the languages on earth to describe how much I hate you.