How to be a theater person:

1. Repeatedly check your score and sing along with the cast recording to memorize your music for a show as you fold and put away three weeks of unfolded laundry.
2. Have three weeks of unfolded laundry because you’ve been in another show.
3. Stumble on your souvenir tearaway thong and souvenir backup tearaway thong from said previous show as you’re folding all that (clean! I swear!) laundry.
4. Instead of figuring out where the hell to put your souvenir tearaway thong and souvenir backup tearaway thong (DAMNIT, AUTOCORRECT! Not once in the last four tries have I intended to type thing!), artfully arrange them with the score of your new show on a bed of unmatched socks to post them dramatically but tastefully on Facebook.
5. Panic that you’ve already forgotten all the music you’ve reviewed and learned as you’ve folded and put away. Because your mind is clearly too busy trying to figure out where to put your souvenir things. 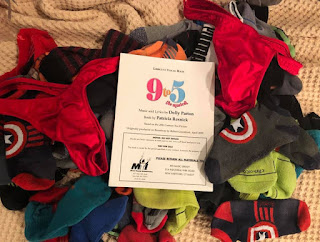