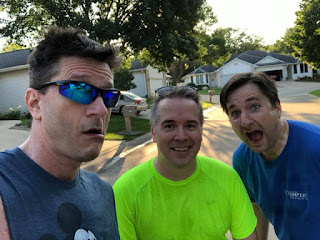 We finally got Scott to be the Deena to our Effie and Lorell! But I think that’s MORE than enough of this Scott-in-the-middle stuff, and we’ll relegate him to the back where he belongs post-haste.

This morning’s three miles were muggy (which I just learned is a mostly Midwestern word that’s our polite way of saying moist), though we felt the illusion of cooling breezes once we were moving through the air. But boy, once we finished running we sure were sweaty and moist. The only real problem we faced on this morning’s run was multiple near-grisly-death experiences; there was apparently a 6:30-am-flash-mob-except-instead-of-the-high-school-drama-department-dancing-to-“Thriller”-in-a-mall-it-was-cars-dispatched-to-encounter-and-almost-not-see-us-at-nearly-every-intersection pride parade. I always give a little thank-you wave to every car that stops for us, but I also always worry that the drivers think I’m self-entitledly hand-yelling at them to STOP YOU SELFISHLY UNSAFE IDIOT BECAUSE WE HAVE THE RIGHT OF WAY and they’ll get to work and talk smack about us to the steno pool. (Dear every driver who ever encounters me at an intersection: I’m pretty sure that I do indeed have the right of way, but you have the giant vehicular-manslaughter machine that would totally win in a game of Intersection Smackdown! against my rippable flesh and brittle bones so I ALWAYS defer to whatever you want to do.)

But where was I? Let’s see: Dreamgirls reference ... moist ... moist again ... gratuitously long compound adjective ... Michael Jackson reference ... talk of grisly death ... gratuitous use of all caps ... antiquated euphemism for a group of secretaries ... parenthetical side note that was not meant for you and you were rude to read it ... what did I forget? Oh, yes: a contextless mention of Rob so he gets included in this rambling post that somehow never got around to mentioning him organically. Because it’s more than Scott. It’s more than me. Whatever miles we run, we are a family.
Posted by Jake at 8:00 AM