It's all a matter of perspective 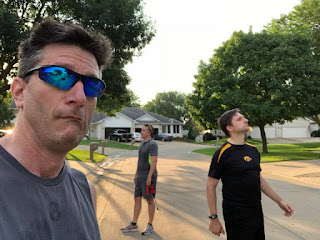 Apparently I made too big a deal last time about who stands in front in our post-run selfies because now we’re doing that whole Renaissance vanishing-point thing with Rob and Scott shrinking into the Florentine distance, albeit with an anachronistic scattering of focal points. ART!

In need of a BAND NAME!