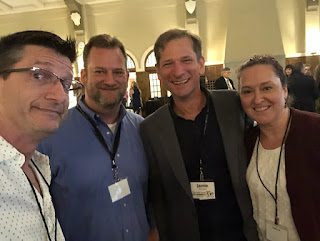 1. I just left the 150th anniversary celebration/reunion of alumni of the University of Iowa’s Daily Iowan newspaper
2. Which has been and continues to be one of the country’s foremost influential and innovation-vanguard college newspapers
3. With AP accreditation and everything
4. As you might have inferred from my use of the word alumni in point 1, I worked there when I attended the University of Iowa
5. First as a copy editor
6. Which means proofreading and fact-checking nerd
7. Then as copy desk editor
8. Which means head proofreading and fact-checking nerd
9. I got paid to correct people’s grammar
10. And brutally curtail their garish use of excessive, showy punctuation
11. Grammar. Nerd. Power. Trip.
12. Though this probably explains why I’m single and living in my parents’ basement at the age of 50
13. And destined to die alone
14. I also wrote a weekly grammar column for the Daily Iowan
15. Seriously
16. It was called "That Grammar Guy"
17. The name was inspired by the TV show That Girl
18. I am not making this up
19. It used bizarre humor, recurring characters—including a cat named Xanthippe—and my own—hopefully funny—mnemonic devices to explain English grammar
20. Xanthippe was Socrates’ wife
21. But I used the name because I thought it was funny and not for its ties to any concept of learning
22. Mnemonic means "memory-aiding"
23. The m is silent
24. The first one, I mean
25. You’re welcome
26. Anyway ...
27. "That Grammar Guy" ran in the Daily Iowan every Monday for two years
28. I got fan mail
29. Mostly from foreign students who were struggling to learn our crazy-ass melting-pot language
30. I also reviewed theater, music and dance for the Daily Iowan
31. So my work there was both nerdy and gay
32. In my capacity as copy desk editor, I hired my brilliant and delightful friend Annette
33. I got to sit next to her at tonight’s dinner
34. Where it occurred to me that everyone in the room—and every career path we represented—was there based on an intricate genealogy of hiring decisions
35. Mind. Blown.
36. I also sat by my friend Tad, who is at least four years younger than I am
37. We didn’t work together at the DI, so I have no proof that he wasn’t at tonight’s dinner just for the pork and the really delicious ranch dressing
38. Speaking of, I didn’t notice until after I sat at our table that each seat had been pre-assigned a random dessert selection
39. I’m glad I accidentally sat in front of the chocolate cake, because it was insanely delicious
40. I noticed early on that Annette probably wasn’t going to finish hers, and I will go to my grave regretting that I did not ask her if I could have it if she was done ignoring its insane deliciousness
41. My running buddy Rob was also at our table but he left before the evening’s program was over so I barred him from being in our post-program group selfie
42. Long-lost friend Jamie wasn’t at our table but he came over to say hi after the program so he’s my new selfie buddy in place of Leavin’ Rob
43. The keynote speaker for the program was a man who hadn’t given me a job right after I’d graduated from college
44. EVEN THOUGH WE WERE BOTH IN THE ETERNAL BROTHERHOOD OF THE IOWAN THAT IS DAILY
45. But he told a story about marketing tampons to young Russian women tonight, so I guess it’s time I forgave and forgot
46. Tampons
47. Russian women
48. Yes, THAT old cliché
49. So there was this one guy who wrote editorials at the DI when I was there
50. Dark hair, lean, handsome, smart, old-money patrician air
51. Did I mention handsome?
52. This might surprise you given the dearth of hints I’ve provided leading up to this bombshell, but I had a huge crush on him
53. Especially on the days when he wore shorts
54. The crush was so eternal and all-consuming that I’ve completely forgotten his name by now
55. But obviously not his legs
56. This did not stop me, however, from hoping he’d be there tonight
57. And that we’d flirt awkwardly
58. Which is the only way I know how to
59. And then we’d totally make out
60. Oops. Did I just say that?
61. And then instead of sitting here typing this endless post, I’d be marrying him in the DI newsroom
62. With everyone at the reunion cheering for us
63. And fighting each other for exclusive coverage of our wedding
64. (We are all newspaper people, of course)
65. And, of course, in this scenario I’d also get Annette’s leftover cake
66. Plus everyone else’s
67. Because I’m one of the grooms and DON’T RUIN MY BIG DAY BY EATING ALL MY CAKE, PEOPLE
68. Sheesh
69. Journalism people, amirite?
70. Anyway, I didn’t see anyone there tonight who looked like him
71. But none of the guys had any legs out for inspection
72. So here I sit, writing this long-ass post instead
73. Which I’d kinda hoped would stretch to 150 points
74. Because it’s the 150th anniversary of the paper
75. But no
Posted by Jake at 11:00 PM