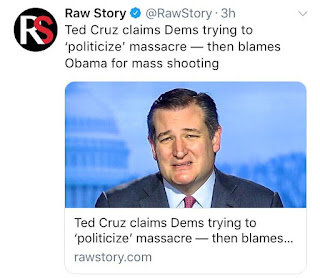 1. Find out the color of the shooter: white = lone wolf/mentally unstable; dark = terrorist
2. If the shooter is a dark terrorist, make empty promises about travel bans and “extreme vetting”
3. If the shooter is a mentally unstable white lone wolf who couldn't possibly be described as a terrorist, well what can you do?
4. If an automatic machine gun was used for the mass murders, scream “Second Amendment!” every two minutes
5. If your name is trump, barely—if at all—acknowledge the shooting and hope that your next catastrophic moral, ethical or intellectual failure will make it disappear
6. Type “thoughts and prayers” on Twitter
7. Fire up the NRA we-need-more-guns spin propaganda machine that’s still warm from last week’s shooting
8. Create a distraction by committing treason
or: Declare that you’re fast-tracking never-discussed infrastructure legislation
or: Blame (in any order) Hillary, Obama, Democratic "obstruction" or the victims who didn't report the shooter's suspicious behavior
or: Bleat that this list is “inappropriate,” ignore that everything on it is documentable and scream that you are offended
or: Just wait for trump’s next batshit eruption, announcement or embarrassment to dominate the news cycle
9. Name all other possible weapons—especially knives!—that could have been used in a mass-shooting murder
10. If your name is trump, describe the murder victims as “beautiful”
11. Feign indignance and bleat “now is not the time” when anyone suggests the country needs to discuss and enact preventive gun control
12. Conspicuously do not declare the proper time to discuss or enact preventive gun control
13. Cite the above pre-packaged propaganda in interviews with news sources you otherwise scream are fake news
14. Type “thoughts and prayers” on Twitter
15. Do nothing meaningful, productive, rational, uncorrupt or humane
Posted by Jake at 12:00 PM